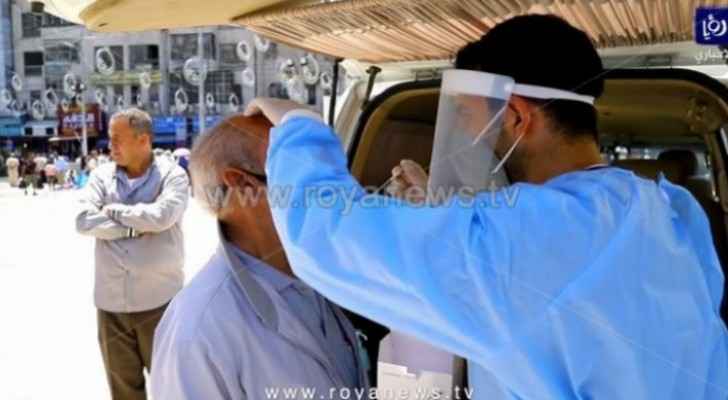 Jordanian doctor Wael Al-Husami, a specialist in interventional cardiology, vascular medicine and endovascular intervention, said Friday that he expects the number of COVID-19 deaths in Jordan by the end of November would reach 90 to 100 per day.

On Facebook, Husami posted the expectations and figures about the developments in the current health situation in Jordan.

The second graph showed the number of beds in hospitals occupied by COVID-19 patients the past two weeks.

Husami noted that from “October 24 to November 6, the number of beds which are predicted to be occupied until the end of November is expected to reach 3,500 beds."

The third graph shows the occupancy of beds in the ICU.

October 31 to November 6, the occupancy of ICU beds increased by 108 within one week, and if rising COVID-19 cases in the ICU remain this way, then by November 20, the number of ICU occupied beds will reach approximately 600.

600 ICU beds is within the upper limits of spaces allocated to coronavirus patients, and, added Husami, “that is two weeks from now."

Dr. Al-Husami said, “if we delay taking measures until November 12, that is, the day after the elections, (...) we will face large numbers of [COVID-19] cases."

"The intensive care unit [will have] reached its maximum capacity and we will need more than 600 beds," added Al-Husami.

The fourth graph showed the number of deaths predicted by the end of November.

Husami explained beforehand that in this period Jordan will record 60-70 daily COVID-19 deaths and if no action is taken, he expects this number to reach 90-100 daily deaths.

He pointed out that the death rate numbers may differ by five to 10+ percent, indicating that all the studies that he has reviewed and worked on, which are about five, have shown that by the end of November, Jordan will reach its maximum healthcare capabilities.

He added that European countries are taking measures such as a total lockdown to ensure the ability of their medical system to withstand the number of patients without reaching the maximum capacity.

Britain, for example, recently imposed a total lockdown when data and field studies indicated that its health system would weaken after three weeks if numbers continued to rise in the same pattern.

The goal of a total lockdown is not to eliminate all cases, but rather to reach less than 500 daily cases, added Al-Husami.

He stressed that although increasing the number of beds and ICU spaces are a part of the preparations to accommodate a higher number of cases, it has not been used in any other country as reason to open the country, indicating that opening the country means an increase in the number of deaths.