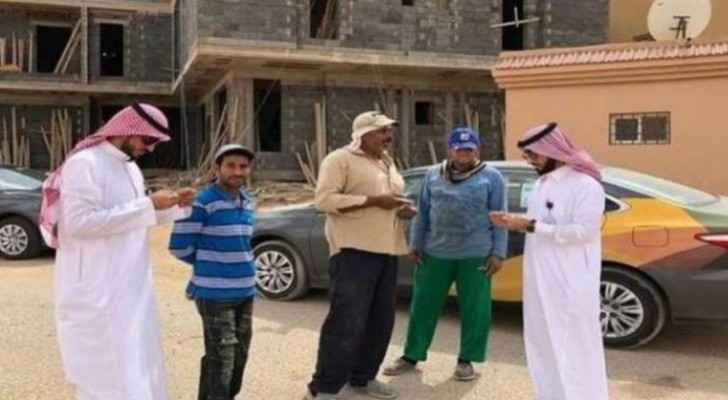 Saudi Arabia announced Wednesday that it will ease restrictions on millions of foreign workers in the Kingdom March 2021.

Foreign workers make up an estimated 10 million of Saudi Arabia’s population and the new sponsorship system will link these workers with their Saudi employers directly by granting them the power to control residency renewal, entry and exit movement and others.

The Ministry of Human Resources and Social Development said it will begin March 14, to implement the “Contractual Relationship Improvement Initiative” with the aim of improving the conditions for job mobility and mechanisms for exit, re-entry and final exit.

According to the ministry, it will allow foreign workers to transfer to another job upon the end of their work contract without the need for the employer's approval, in a shift from what is currently in place according to the sponsorship system.

An employer’s consent is no longer required when a foreign worker wishes to travel, and instead the individual can apply for an exit or re-entry permit which the employer will be notified using an electronic notification.

Workers no longer need permission from employers to depart at the end of their contract, instead the worker can leave immediately and the employer will be notified using an e-notification.

It will be possible for workers to leave the Kingdom before the end of their contract without permission, however they must bear all consequences of the early termination of the contract.

The ministry’s statement did not mention the crime of "absconding", according to which employers can report the disappearance of the worker, which means that the foreign worker will no longer have legal documents and can be arrested, imprisoned and deported.

However, the Deputy Minister for Inspection and Development of Work Environment at the ministry, Sattam Al-Harbi, confirmed in an interview with Bloomberg Wednesday, that reforms will include canceling absconding and replacing it with a system which defines mechanisms for terminating employment contracts.

"These are huge changes," he said, adding, "We aim to (...) improve working conditions and make the labor market in Saudi Arabia more dynamic and productive."

However, the reforms do not include the 3.7 million domestic workers, Al-Harbi emphasized.

Human Rights organizations have called for the abolition of the requirement for a foreign worker to have a sponsor employer to enter the country, and to prevent Saudi employers from the possibility of canceling residency permits at any time.

Last week, the Human Rights Watch (HRW) said in a report that if Saudi Arabia wants to abolish the sponsorship system, it must "address each of these elements."

HRW added, "Saudi Arabia's wealth and economy have been built on the backs of millions of migrant workers, and the time has come for a radical change by granting them legal protection and guarantees of the rights that they deserve."

During the coronavirus crisis, many foreign workers found themselves stuck in a spiral of debts and were not allowed to leave before they were paid, while Saudis called on social media to expel foreign workers and accused them of spreading the virus.

PSD launches 'My Iftar with my Family' initiative for ....