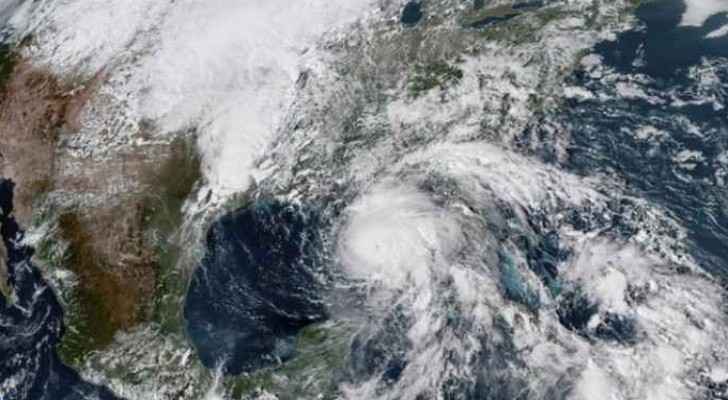 The storm hit land on the island of Catanduanes Sunday around 05:00 (21:00 GMT Saturday), accompanied by winds of 225 kilometers per hour and storms of up to 310 kilometers per hour, stripping the roofs of houses, uprooting trees and causing sudden floods.

Goni was considered a "super strong" hurricane before its intensity waned during its passage through Luzon island towards Manila, according to the National Weather Service.

And the agency warned Saturday of "disastrous winds and heavy rains that may cause floods."

Goni arrived a week after cyclone "Moulav", which struck the same area, killing 22 people and flooding a large agricultural area, before continuing on its way to Vietnam.

The governor of the Albay region, Francis Bishara, told a local radio station that at least seven people, including a five-year-old child, were killed in this area. Most of the victims were buried in and around a volcanic eruption that inundated two villages near the active Mayon volcano.

"The wind is strong and I can hear the trees shaking," said Francia Mai Porras, 21, from her home on the coast in Legazpi, Albay province.

Regional security official Cedric Dyep said by radio that the roofs of two shelters had been blown out and residents had moved to the ground floor.

"The floods inundated our villages," said Carlos Irwin Baldo, mayor of Camaleg, near Legazpi. "The roads are full of debris coming from mountains, branches and sand, some of them from Mayon volcano, and a number of roads are no longer usable," he added.

- The airport is closed -

In Manila, residents of some slums in low-lying areas have been evacuated due to the risk of flooding and the capital's airport has closed.

The Natural Disaster Prevention Council issued a message that residents received on their mobile phones, warning of "destructive winds" that could hit the capital and its suburbs.

The hurricane reached the capital, especially some of its suburbs.

Thousands of soldiers have been put on alert to assist in the evacuations.

Schools closed since the outbreak of the Covid-19 epidemic are using shelters as well as gymnasiums.

Coronavirus patients are being treated in tents. And officially recorded in the archipelago more than 378 thousand injuries and 7100 deaths in Corona. The pandemic complicates access to many resources due to their directive to combat Corona.

- Another hurricane is forming -

Mary Ann Ishag, 23, with her parasites, her parents, brothers and sisters, fled their home in Legazby to take shelter in a school they share a classroom with many other families.

This family was damaged by previous hurricanes. She brought with her a stove, canned meat, instant noodles, coffee, bread, pillows and blankets.

"We fear the strength of the hurricane," Ishag said, explaining that "every time a hurricane occurs, our house is damaged because it is built of wood and its roof is made of cast iron."

Hundreds of people found themselves stranded after the Coast Guard ordered ferries and fishing boats not to sail while anticipating waves of up to 16 meters high.

The typhoon is expected to weaken "significantly" as it crosses Luzon before reaching the South China Sea Monday morning, according to the meteorological services.

But another hurricane forming over the Pacific Ocean is expected to hit the archipelago.

Haiyan was the worst typhoon in recent history in 2013, killing more than 7,300 people, especially in the central city of Tacloban, which was flooded by giant waves.

Jordanian Embassy in Washington warns Jordanians in US as ....