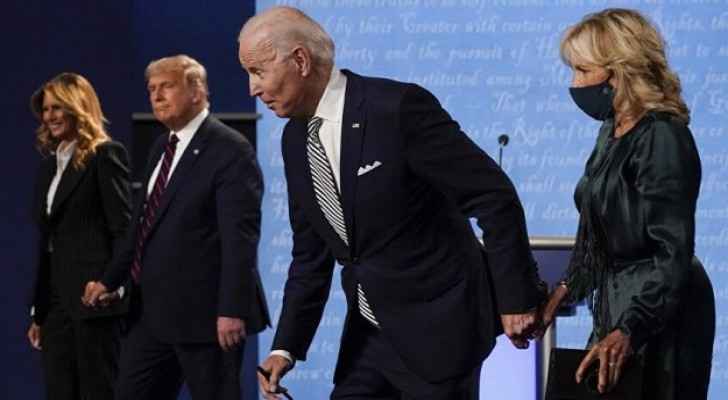 Tensions were high Wednesday night as President Donald Trump and Democratic nominee Joe Biden took to the stage for the first of three debates ahead of the November 3 US presidential election.

Trump, down in the polls, was expected to offer clearer messaging on policy in an attempt to rally moderates. Instead, he catered strictly to his existing voter base, furiously interrupting both Biden and moderator Chris Wallace, who struggled to maintain order throughout the debate.

Biden similarly offered little in terms of political ideas. The former vice president, between dodging ad hoc attacks from Trump, seemed lost in his attempt to appease the moderates who consider him too liberal, and leftists who say he is unwilling to divert from institutional politics to make meaningful change.

Critics across the aisle largely consider both candidates to have been unsuccessful in educating voters on their respective policy plans despite the debate’s structure to address America’s most pressing issues: the Supreme Court; COVID-19; the economy; race in America; the records of Trump and Biden; and electoral integrity.

After the September 18 death of former Supeme Court Justice Ruth Bader Ginsburg, Republicans and Democrats have found themselves in a political gridlock over who should replace her. Republicans argue President Trump should do so as he is the sitting president, but Democrats argue doing so would be a missed opportunity to let the American people be heard, and say the decision should be made by the winner of the upcoming election.

The question of the Supreme Court nomination was the first to be asked in the debate. Trump, who has already nominated conservative Amy Coney Barrett, touted his choice as likeable to both parties and continued the Republican narrative that the nominee should be of his choosing. Trump, however, appeared unconcerned about when the confirmation need take place, saying, “We have plenty of time. Even if we did it after the election itself, I have a lot of time after the election, as you know,” a reference to his confidence that he will win a second term.

Biden unsurprisingly dissented from this opinion, saying “we’re in the middle of an election already… Tens of thousands of people have already voted. So the thing that should happen is we should wait… Because that’s the only way the American people get to express their view- is by who they elect as president, and who they elect as vice president.”

The discussion of COVID-19 was especially prevalent in the debate given that the future president will face the task of recovering a nation that currently leads the world in COVID-19 cases and deaths, currently at seven million and 200 thousand, respectively.

Trump deflected blame onto China, and insisted that his “closing” of the United States- a largely questionable claim- allowed for far less cases than the nation would otherwise have. The president further touted that many think he is doing a “phenomenal job” and that the United States is a “few weeks away from a vaccine.” The president also defended his large-scale political rallies- held against the advice of public health officials who say they do not allow for adequate social distancing- and said there has been no negative health consequence to attending supporters.

Biden capitalized on criticsm of Trump over America’s leading status in COVID-19 cases and deaths, but made little reference to plans of his own. The Democratic candidate slipped up on a question about whether or not he and his running mate, Senator Kamala Harris, are contributing to fear of the vaccine which Wallace asked after Harris remarked that public health experts “will be muzzled, will be suppressed.” Biden backtracked saying that there are many scientists not working for Trump that should be trusted by the public.

Discussion over the American economy was largely a continuation of the COVID-19 discussion, with Trump bragging that he has helped recover and regrow the economy at record speed amid predictions that regrowth would take much longer. The two also battled it out over employment rates and tax plans, with both arguing that they had brought back manufacturing jobs under their respective administrations and promising more tax cuts to the American people.

Within the segment, an Arabic word made its way into a presidential debate for the first time in American history. Grilled over a recent New York Times report that Trump paid only $750 in federal income tax in 2017, Trump said that he would soon make known that he paid “millions of dollars” in income tax. Biden then asked, “when? Inshallah?”

Inshallah is a word meaning “God-willing” and is often used by Arab leaders to defer time-sensitive questions.

As cases of police brutality towards Black Americans continue to mount in America, Biden and Trump- both of whom are heavily criticized for previous insensitive remarks on race- were individually questioned over their stances toward white supremacy and ongoing protests.

President Trump, who in 2017 remarked that there were “very fine people in both sides” at a Klu Klux Clan rally, declined to denounce white supremacy when asked to do so by Chris Wallace. He instead defended his ending of racial sensitivity training, which aims to educate people on topics like white privilege, calling it “racist,” and a “radical revolution,” that teaches people to “hate this country.”

Biden, under fire from his own recent comments that Black voters “ain’t Black” if they vote for Trump, tried to regain footing by advocating more community-based policing and admitting that systemic racism plagues law enforcement and other facets of American society. Biden continues to be criticized by advocates for his support of a 1994 crime bill that allowed for mass incarceration, disproportionely of Black Americans. His messaging of race and crime continues to be shaky as he attempts to garner the support of law-and-order advocates, and those who insist American policing needs a complete reformation.

Climate change was the prominent topic during the records segment of the debate. When asked, Trump expressed his desire for “beautiful, clean air,” but did not follow up with any substantial policy stance. Trump pulled out of the Paris Accord in 2017, the most comprehensive global framework tackling climate change today.

Biden, again appearing lost in his attempt to appease both moderates and staunch leftists, tried to distance himself from the Green New Deal, a comprehensive set of renewable energy proposals often criticized as “too radical,” but insisted he would rejoin the Paris Accord. He touted his “Biden Plan” as the best pathway to more environmentally-friendly infrastructure that will help create millions of jobs in renewable energy.

After Trump last week refused to promise a peaceful transfer of power if he loses the election, Wallace offered the president the chance to clarify his stance. He declined to do so, instead saying that a transfer of power “could take months.” In light of the pandemic, mail-in voting is quickly becoming the norm, but Trump insists this will lead to many “fradulent votes” and a “rigged election.”

Biden used his time to give direction to Americans on how to best vote, and quoted the FBI director by saying “there is no evidence at all that mail-in ballots are a source of… being manipulated and cheating.” He said Trump’s calls against mail-in ballots are simply an attempt to “disuade people from voting.”

“He’s trying to scare people into thinking it’s not going to be legitimate. Show up and vote. You will determine the outcome of this election. Vote, vote, vote.”

Trump testing positive likely to have little effect on ....

Trump testing positive likely to have ....