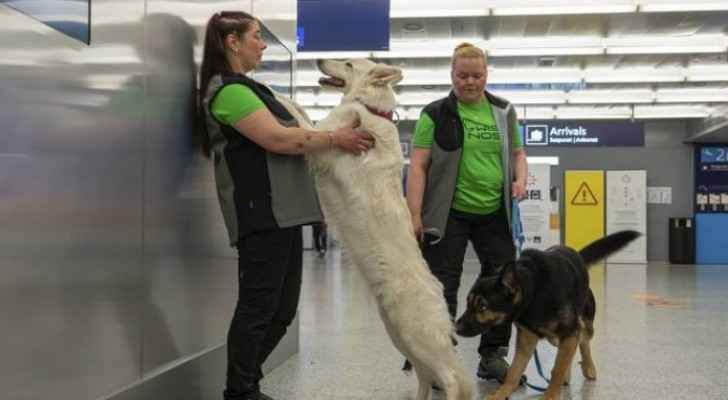 Dogs are currently being trained to detect coronavirus began sniffing samples from passengers at Helsinki-Vantaa airport this week as part of a project in conjunction with other regular checks at the airport, said the Finnish authorities.

Volunteers trained a team of 15 dogs and 10 trainers to perform the task under the care of a private veterinary clinic.

Among the team is the dog Kochi, a Spanish rescue dog that trained in the use of its sense of smell in Finland and had previously worked in detecting cancerous tumors.

No scientific study has proven the efficiency of dogs in detecting COVID-19 infections, so passengers who are suspected of being infected with the virus can volunteer to undergo examination for a swab to confirm the result.

During the test, passengers wipe their neck with a piece of cloth and place it in a tin box that is delivered to another room for the dog to smell it to give an instant result.

The team of scientists found in their research that dogs discover the disease five days before symptoms on patients appear, said assistant professor at the University of Helsinki specializing in clinical research on pets, Anna Film-Bjorkmann.

That the dogs in the program approached near 100 percent sensitivity, added Film-Bjorkmann.

The authorities in the United Arab Emirates had carried out similar checks with the help of police dogs at Dubai International Airport.

"It is also possible in the future ... that these dogs will revolve around the passengers in a manner similar to what dogs do [check goods in] customs,” said Deputy Mayor of Fanta, Timo Arunkito.

A guide on how an expat can come to Jordan seamlessly

A guide on how an expat can come to Jordan ....

A guide on how an expat can come to Jordan ....