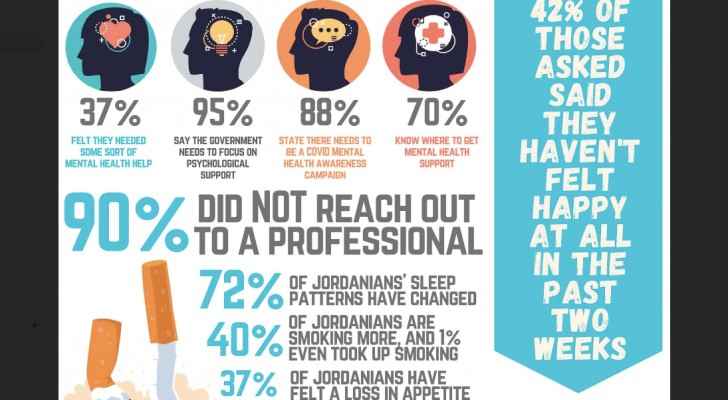 Seventy-five percent of Jordanians were psychologically affected by the coronavirus crisis, according to a survey of approximately 2,000 people.

The Effect of COVID-19 on Jordanians' Mental Health survey was conducted by research company NAMA Strategic Intelligence Solutions, in cooperation with mental health.

The survey was carried out online via Facebook during lockdown and included 1,992 participants.

A third of the survey said social events and traveling worries them.

Jordanians proved to be more fearful of the social repercussions of testing positive for COVID-19, than the treatment process.

Over the two weeks prior to the survey, participants reported experiencing different unpleasant health and psychological issue; 68% said they felt on edge, 68% reported irritability and anger, 61% felt sadness and depression, 61% feared the danger of getting hurt, 48% suffered with headaches, neck pain and back pain, 42% felt weakness and tiredness, 37% had a suppressed appetite and 9% had thoughts of death and dying.

A little under three quarters of Jordanians reported an increase in family problems at home and 42% said they had not felt happy at all over the two weeks before the survey.

In terms of professional mental help, 37% felt they needed help, 95% said the government should focus on providing citizens with psychological help, and 88% believe there needs to be a COVID-19 mental health awareness campaign.

However, only 10% actually sought help from professionals.

As a result of the coronavirus pandemic, 40% of smokers said they consumed more cigarettes and, in the two weeks before the survey 33% of Jordanians thought about moving to a different country.

A little over half of Jordanians feel very safe in Jordan, but approximately a third felt Jordan is moving in the wrong direction.

Jordanian government not considering a ....