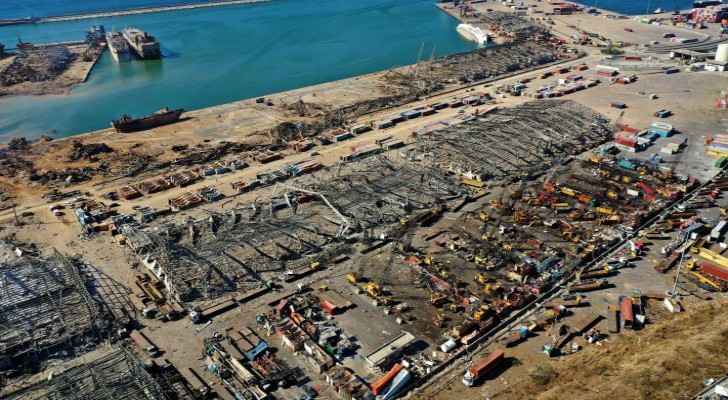 The chemical that caused the worst explosion in Beirut's history, arrived in the Lebanese capital seven years ago on a dilapidated cargo ship chartered by a Russian businessman, and, according to the captain of the ship, it was never scheduled to stop there.

The captain of the Rhosus ship in 2013, Boris Prokoshev, said that the ship’s owner told him he had to stop in Lebanon to load additional cargo.

Prokoshev added that the ship was carrying 2,750 tons of flammable chemical material from Georgia to Mozambique, but then an order came that he had to stop in Beirut on his way across the Mediterranean Sea.

The ship's crew were required to load heavy road equipment and transport it to the Jordanian port of Aqaba before resuming the journey to Africa, where the ammonium nitrate was to be delivered to an explosives manufacturing company.

However, the ship never left Beirut’s port. It tried many times to load the additional cargo safely, but there were long legal disputes over port fees.

Regarding the attempt to load the additional cargo, Prokoshev, 70, told Reuters: "It was impossible. It could have destroyed the whole ship, so I said no."

The captain and creditors' lawyers accused the owner of the ship of abandoning it and succeeded in obtaining a seizure order. Months later, for safety reasons, the ammonium nitrate shipment was unloaded and placed in a warehouse in the port.

On Tuesday, that warehouse caught fire and exploded near a populated residential area in the city. The massive explosion killed 157 people, injured 5,000 others, flattened buildings and caused the displacement of more than a quarter of a million people.

The ship may have succeeded in leaving Beirut if it had been able to load the additional cargo.

The captain and three crew members spent 11 months onboard during the legal dispute without receiving salaries and with limited food supplies. When they finally left, the ammonium nitrate was discharged.

Prokoshev said the owner of the ship is Russian businessman, Igor Greshushkin.

A security source said the Cypriot police interrogated Greshushkin at his home in Cyprus, on Thursday, and a police spokesman said an unnamed person was questioned at the request of the International Police in Beirut regarding the shipment.

The ammonium nitrate shipment was sold by the Georgian fertilizer maker Rustavi Azot LLC and was destined for Fábrica de Explosivos, the explosives manufacturer in Mozambique.

A senior representative of Fábrica de Explosivos did not immediately respond to a request for comment sent to him through LinkedIn.

Lifan Burdiladze, director of the Rustavi Azot plant, told Reuters his company had been running the chemical plant for only three years, so he would not be able to confirm whether the ammonium nitrate was produced by his company.

He described the decision to store the material in the Beirut port as a "grave breach of safe storage procedures on the grounds that ammonium nitrate loses its beneficial properties within six months".

Preliminary investigations by the Lebanese authorities indicated negligence in dealing with a potentially dangerous chemical.

The Rhosus ship sank while it was docked in Beirut’s port, according to a letter sent by a lawyer to Prokoshev in May 2018, in which he said that the ship sank "recently".