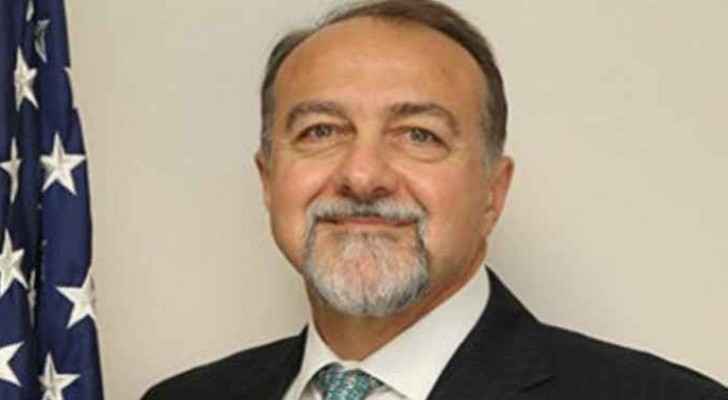 Henry T Wooster, has been confirmed by the full Senate Foreign Relations Committee as the next US Ambassador to the Hashemite Kingdom of Jordan on Friday.

Wooster pledged to help the country create a stable and growing economy while speaking before the Senate on May 13.

He said: "If confirmed, I pledge to work with you, with all the tools the US government has, with international organisations like the IMF and the World Bank, and with the international community, to help Jordan create a stable and growing economy. "

Below is Wooster's full statement published by the embassy:

Chairman, Ranking Member, distinguished Members of the Committee, it is a privilege and an honor to appear before you today as the President’s nominee to serve as the U.S. Ambassador to the Hashemite Kingdom of Jordan.  I am grateful to President Trump and Secretary Pompeo for their confidence and trust in me.

I would be remiss if I did not also thank my wife, Laura, and our four children who have shared this public service journey.  Their love and care, while we served worldwide, has sustained me.  I joined the Foreign Service 20 years ago, following nine years in the civil service, five of which were spent overseas, and before that, served in the U.S. Army and Army Reserve.  I have served in eight U.S. embassies — from Paris to Baghdad — as well as in numerous positions in Washington, D.C.  I have advocated for U.S. interests across the globe and worked with allies and the international community to pursue joint goals.  At present, I am Deputy Assistant Secretary of State for the Maghreb and Egypt.

As Secretary Pompeo said last year, “Jordan is one of the United States’ enduring strategic partners” and from my own past service there, I know this to be true.  American-Jordanian friendship advances U.S. interests, as does Jordan’s path of modernization and its example of moderation.  The Government of Jordan’s choices have brought its people real benefits, as shown by Jordan’s 98 percent literacy rate, 74-year life expectancy, and 1 percent child mortality rate.  Yet, despite these successes, Jordan has suffered a series of external shocks over the last decade—such as the Syrian civil war and the fight against ISIS, and more recently, COVID-19—that have battered its economy.

The U.S. priority in Jordan is to help the Kingdom’s economy recover in a way that ensures its stability and security.  Economic growth in Jordan slowed from 8 percent in 2007 to about 2 percent in 2011, when the country was hit by regional disruptions caused by the Syrian crisis.  It had remained at that level until COVID-19 forced an economic shutdown. Nevertheless, Jordan has stepped up to the challenge.  Its 2020 budget contains concrete, meaningful reforms to stimulate the economy, and the Jordanian government’s decisive response to COVID-19 should enable it to begin safely reopening its economy.  If confirmed, I pledge to work with you, with all the tools the U.S. government has, with international organizations like the IMF and the World Bank, and with the international community, to help Jordan create a stable and growing economy.  Thanks to your strong bipartisan support, U.S. economic assistance to Jordan in FY 2019 exceeded $1 billion, including $745 million in direct budget support that bolstered the Kingdom’s economy as it implemented reforms and reduced budgetary strains.

Our partnership with Jordan has long included military collaboration.  Jordan has been a leading member of the Global Coalition to Defeat ISIS and has more broadly been an invaluable ally in our joint work to counter terrorism, support international peacekeeping, and provide humanitarian assistance throughout the region.  Jordan is the third largest recipient of Foreign Military Financing, with our support focusing on the implementation of the Jordan Armed Force’s five-year plan for modernization, readiness, and enhanced interoperability among Jordanian, U.S., and NATO forces.  Our military assistance furthers Jordan’s place in the region as a bastion of stability.

Beyond Jordan’s value to the United States as a strategic partner, the Kingdom has proven itself a kind and generous neighbor.  Not only does Jordan promote peace in the region, but throughout its history it has welcomed millions of refugees from neighboring countries, including hundreds of thousands of Syrians.  I am proud the United States has contributed nearly $1.5 billion dollars of humanitarian aid to refugees and host communities in Jordan since the Syria crisis began, and that the United States has assisted Jordan in hosting refugees from Iraq, Yemen, and scores of countries.  If confirmed, I will continue to advocate for humanitarian assistance in international fora to promote burden sharing and ensure we collectively provide for those in need.

If confirmed as the next U.S. Ambassador to the Hashemite Kingdom of Jordan, I will continue to strengthen our partnership with the Government of Jordan and the Jordanian people, especially as the country works to recover from the COVID-19 pandemic.  To reflect the face and values of the United States, I will recruit, hire, and maintain a diverse Embassy team.  I will prioritize the safety of the over 23,000 U.S. citizens residing in Jordan and the over 100,000 American tourists traveling there yearly.  To protect and advance U.S. interests, I will proudly lead the nearly 1,000 American and local staff at our Embassy.  And, I will have a special duty to ensure the security of the nearly 500 American family members in our Embassy community.

Mr. Chairman, Ranking Member, and distinguished Members of the Committee, if confirmed, I will do my utmost to honorably represent the United States of America to the Hashemite Kingdom of Jordan and its people.  To do this and ensure the most informed and effective foreign policy, I look forward to continuing my engagement with you and other Members of Congress.

I thank you for the opportunity to appear before you today, and I look forward to your questions.