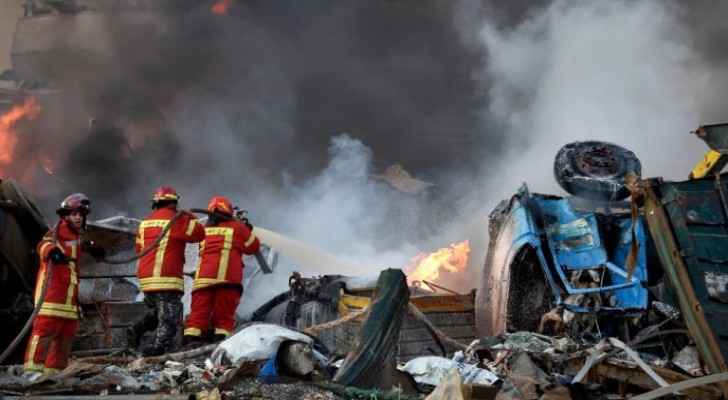 Seven Jordanian citizens were injured as a result of the blast in Beirut, said the spokesperson for the Ministry of Foreign Affairs and Expatriates (MFA), Dhaifallah al-Fayez, on Wednesday.

Four citizens are in good health after receiving treatment, and three others are currently recovering in Lebanese hospitals.

Al-Fayez called on Jordanians in Lebanon to adhere to public safety measures issued by Lebanese authorities and encouraged them to contact the embassy or the operations centre unit at the MFA if they needed help.

The Director General of the Lebanese Civil Defence, Raymond Khattar, said teams are continuously searching for missing people under the rubble of collapsed buildings.

However, rescue parties are struggling to search certain areas due to the huge amount of debris.

"We are searching for victims at sea," he said.

The Secretary-General of the Lebanese Red Cross, George Kettana, said 11 casualities were found onboard the United Nations Interim Force in Lebanon ship.

The head of the Syndicate of Doctors, Sharaf Abu Sharaf, said Beirut hospitals were full and treatment for long-term conditions is continuing.

"There is a need for medical equipment for operations, in addition to medicines for diseases damaged due to the accident,” he said.

A member of the Lebanese parliament, Marwan Hamadeh, submitted his resignation in protest of failings that he believed led to the blast, on Wednesday morning.

Hamadeh called for the formation of an international investigation committee to look into the explosion and ensure the Supreme Council to holds leaders and ministers accountable.

"I have no confidence in officials and there is no turning back from my submitted resignation,” said Hamadeh.

“There has been a gradual decline that led to this.”