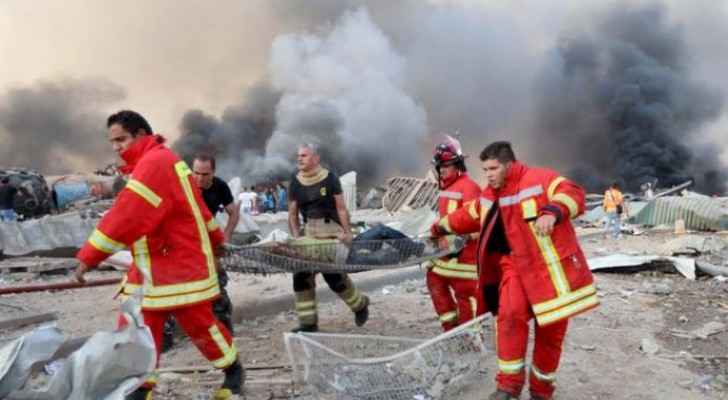 More than 100 people have been killed and four thousand have been injured as rescuers continue efforts to find victims in the rubble, following a huge explosion at Beirut Port.

Firefighters were called to reports of a fire at a warehouse shortly after 6pm on Tuesday. A huge blast followed shortly afterwards.

Lebanese Prime Minister, Hassan Diab, confirmed that the explosion was due to the explosion of approximately 2750 tons of ammonium nitrate, a substance found in certain fertilizers and explosives, had caused the explosion.

Diab sent an urgent appeal to all “friendly and brotherly countries that love Lebanon” asking them “to stand by Lebanon and help us to treat our deep wounds".

The amount of estimated ammonium is equivalent to 600 to 800 tons of TNT.

"It is unacceptable that there is a shipment of ammonium nitrate estimated at 2750 tons, that has been present for six years in a warehouse, without taking precautionary measures," said Diab during a meeting of the Supreme Council of Defence on Tuesday.

The cause of the fire has not been officially confirmed but local security services believe it was caused by a hole being welded in an iron gate.

The American Institute of Geophysics said sensors detected the explosion as an earthquake of 3.3 on the Richter scale.

"The defence council decided to declare Beirut a disaster-stricken region and declare the state of emergency for the period of August 4 to 18," said the Lebanese President, Michel Aoun, in a statement on Tuesday.

People in Cyprus reported hearing and feeling the explosion.

The spokesperson for the Jordanian Ministry of Foreign Affairs and Expatriates said a Jordanian woman was injured but she is doing well.

The Jordanian embassy in Beirut is reaching out to all Jordanians in Lebanon to ensure their safety and good health.

The Royal Hashemite Court (RHC) tweeted: “Upon the directives of His Majesty King Abdullah II, the Supreme Commander of the Jordan Armed Forces-Arab Army, a military field hospital including all medical specialties and necessary personnel, will be dispatched to Lebanon to provide medical support.”

Jordan’s flag at the main entrance of the RHC will be “flown at half-mast for three days, in memory of the victims of the Beirut port explosion”.

Several other countries offered their assistance including France, which sent several tons of medical supplies and defence squads on Wednesday.

The United States, Germany and Iran offered their help as well.

US President, Donald Trump, told reporters: "We have a very good relationship with the people of Lebanon, and we will be there to help."

The Israeli occupation, which is practically at war with Lebanon, offered "humanitarian and medical assistance" on Tuesday.

Lebanon is currently experiencing the worst economic crisis in history, with a deteriorating currency, restrictions on bank deposits, inflation and high prices, and rising unemployment.