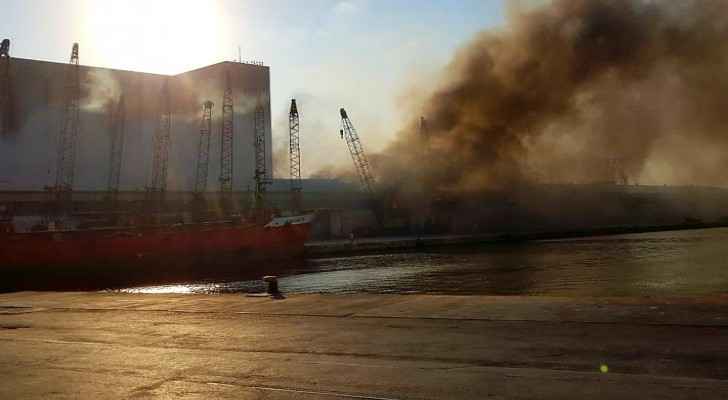 The death toll from the blast in Beirut port has reached 137, and the number of injured has exceeded 5,000, according to the Lebanese Ministry of Health.

Rescue teams are still searching for dozens of missing individuals under the rubble of collapsed buildings and at sea.

Up to 300,000 are believed to have been made homeless and the death toll is expected to rise.

The Lebanese government formed an investigation committee, with the aim of finding those responsible for the disaster that led to widespread devastation in the city and holding them accountable.

The committee has been given five days before they have to announce their final results.

The Lebanese customs department had sent six official letters regarding the presence of dangerous materials in the port of Beirut, after which security of state took over the matter in 2018, said Roya’s correspondent in Lebanon, Joanna Nasser Al-Din, on Wednesday.

Firefighters were called to reports of a fire at a warehouse shortly after 6pm on Tuesday. A huge blast followed shortly afterwards.

Videos circulating on social media showed the moment a warehouse at the port exploded, sending shockwaves reverberating across the city, with the impact even being felt in the suburbs.

Lebanese Prime Minister, Hassan Diab, confirmed that the explosion was due to the explosion of approximately 2,750 tons of ammonium nitrate, a substance found in certain fertilizers and explosives, had caused the explosion.

Diab sent an urgent appeal to all “friendly and brotherly countries that love Lebanon” asking them “to stand by Lebanon and help us to treat our deep wounds".

The amount of estimated ammonium is equivalent to 600 to 800 tons of TNT.

"It is unacceptable that there is a shipment of ammonium nitrate estimated at 2,750 tons, that has been present for six years in a warehouse, without taking precautionary measures," said Diab during a meeting of the Supreme Council of Defence on Tuesday.

The cause of the fire has not been officially confirmed but local security services believe it was caused by a hole being welded in an iron gate.

The American Institute of Geophysics said sensors detected the explosion as an earthquake of 3.3 on the Richter scale.

"The defence council decided to declare Beirut a disaster-stricken region and declare the state of emergency for the period of August 4 to 18," said the Lebanese President, Michel Aoun, in a statement on Tuesday.

People in Cyprus reported hearing and feeling the explosion.

The spokesperson for the Jordanian Ministry of Foreign Affairs and Expatriates said a Jordanian woman was injured but she is doing well.

The Jordanian embassy in Beirut is reaching out to all Jordanians in Lebanon to ensure their safety and good health.

The Royal Hashemite Court (RHC) tweeted: “Upon the directives of His Majesty King Abdullah II, the Supreme Commander of the Jordan Armed Forces-Arab Army, a military field hospital including all medical specialties and necessary personnel, will be dispatched to Lebanon to provide medical support.”

Jordan’s flag at the main entrance of the RHC will be “flown at half-mast for three days, in memory of the victims of the Beirut port explosion”.

Several other countries offered their assistance including France, which sent several tons of medical supplies and defence squads on Wednesday.

The United States, Germany and Iran offered their help as well.

US President, Donald Trump, told reporters: "We have a very good relationship with the people of Lebanon, and we will be there to help."

The Israeli occupation, which is practically at war with Lebanon, offered "humanitarian and medical assistance" on Tuesday.

Lebanon is currently experiencing the worst economic crisis in history, with a deteriorating currency, restrictions on bank deposits, inflation and high prices, and rising unemployment.