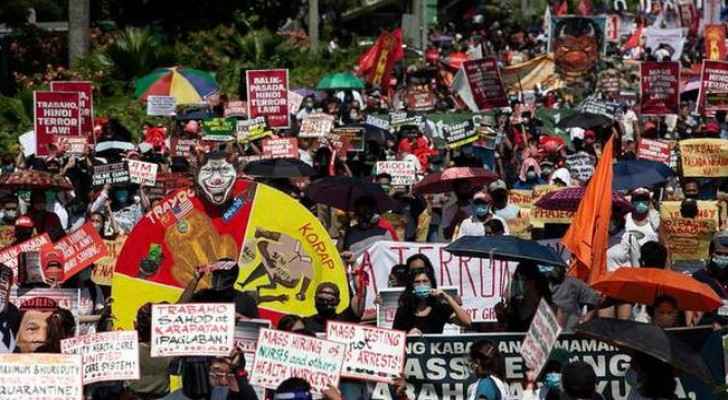 Hundreds of protestors risked arrest by marching and organising motorcades in response to a new anti-terror law and police reforms, ahead of President of the Philippines Rodrigo Duterte’s annual state of the nation speech.

Protestors were seen holding signs and placards with the message “stay safe, not silent”, as well as wearing masks, as they took to the streets of capital city Manila.

Others chose online protest avenues, including burning Duterte’s “e-ffigy” in a virtual rally via online video.

This choice came after 10 people or more gathering was banned under coronavirus restrictions, but many have cited these restrictions as methods of suppression of criticism, especially the handling of the pandemic.

Protestors accused the government of using the pandemic to silence countrywide criticism over an array of issues, including the way it has handled the health crisis.

Public gatherings of no more than 10 people is the latest restriction to be announced by the authorities. More than a dozen petitions have called for the Supreme Court of the Nation to repeal the law fearing it could be used to crush legitimate dissent and human rights defenders.

The closure of the Philippines’ largest TV network, ABS-CBN Corp. by the House of Representatives – the majority of which are Duterte’s allies – was also denounced by protestors. Duterte had reportedly threatened to shut the station down following its support of his rival in the 2016 presidential elections and the network’s refusal to run his advertisements. ABS-CBN has denied any misconduct.

Protestors held a short rally outside the network’s offices on Monday.

“The failed government response to the rising number of infected people, the worst economic crisis in history […] will be remembered as part of Duterte’s legacy,” according to left-wing protest leader Renato Reyes.

Duterte is expected to speak on Monday in the state of the nation speech, which many predict will largely focus on the way the country has responded to the COVID-19 situation. Officials claim their handling of the crisis has been relatively successful.

Critics, on the other hand, have claimed it was an alarming failure, referencing the more than 80,000 confirmed COVID-19 cases and the almost 2,000 deaths, making the Philippines a Southeast Asian hotspot for the virus.

Several legislators, senators and congressional staffers have tested positive for the virus.