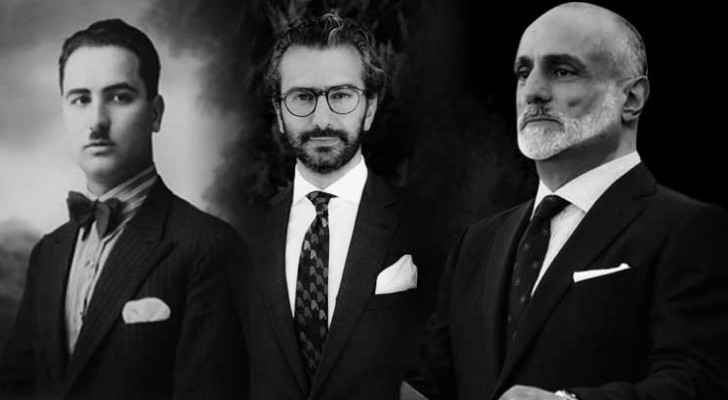 The memory of his grandfather’s framed photograph hanging on the wall in his grandparents’ bedroom in their Zarqa home is a vivid one for Fuad El Karsheh.

The renowned television personality recalls lying on his grandparents’ bed, listening to his grandmother tell stories about their life in Jerusalem as he studied the image of his grandfather, Elias, smartly dressed in a pinstriped suit, a white handkerchief tucked into his breast pocket.

Just a small boy at the time, he had no idea how formative that photograph would be for his on-screen persona, or how it would lead to a chance meeting with a member of the royal family with a shared love for such details.

“The photograph was taken at the end of the 1920s in Jerusalem when it was under the British administration. At that time, it was fashionable to wear that type of ‘gentlemanly’ attire and many people spoke English,” says El Karsheh, 40, who explains that his grandfather used to work at the oldest printing house in Jerusalem, the Greek Orthodox Patriarchate printing house, until his grandparents moved to Zarqa during the 1948 war.

El Karsheh was five-years-old when his grandfather died, but the image of his handkerchief had a lasting influence.

So much so, that when El Karsheh secured his first role as a television presenter at Jordan Radio and Television Corporation aged 25, he began placing a handkerchief in his breast pocket.

“It wasn’t a popular thing to do for young people at that time. When I appeared on the screen wearing this, it was a bit of statement,” says El Karsheh.

But there was someone else who also took pride in wearing a handkerchief at the time, and that was Prince Talal bin Muhammad.

“It was really a part of his identity,” says El Karsheh, who describes the Prince’s style as also being a big inspiration for his own look.

Then, in February last year, El Karsheh had the chance to meet Prince Talal in person.

“At the end of a meeting with Princess Ghida Talal at their home, I passed on my regards to the Prince and explained how I was still wearing a handkerchief in my pocket because of him,” says El Karsheh.

The Princess asked him to wait a moment before disappearing briefly. When she returned she told El Karsheh somebody wanted to say ‘hello’ to him – that ‘somebody’ was the Prince.

The men spent time chatting together in the royal couple’s home library.

“I was so impressed at how knowledgeable he was. There were vast numbers of books, on many topics, and he had read them all,” he says, describing it as being a very special experience.

A few days later, El Karsheh met with Princess Ghida once again. This time, she told him she had a gift for him.

“She gave me a wrapped gift box with the Royal signature and the couple’s name on it. Inside was a beautiful white Italian silk handkerchief. Apparently, it had been Prince Talal’s favourite,” says El Karsheh.

“I was really so happy. It shows how humble Prince Talal is despite his status.”

Today, Sunday, is the Prince’s 55th birthday and it is for this reason that El Karsheh wanted to share how the touching gesture has become a significant moment for him.

It is a story that spans cultures, generations and classes while encompassing elements of British style, alongside Palestinian and Jordanian ways of life, he says.

El Karsheh’s grandmother passed away more than 20 years ago and is now buried in Zarqa. Meanwhile, the framed black and white photograph of his grandfather now hangs proudly in his own family home’s in Amman.