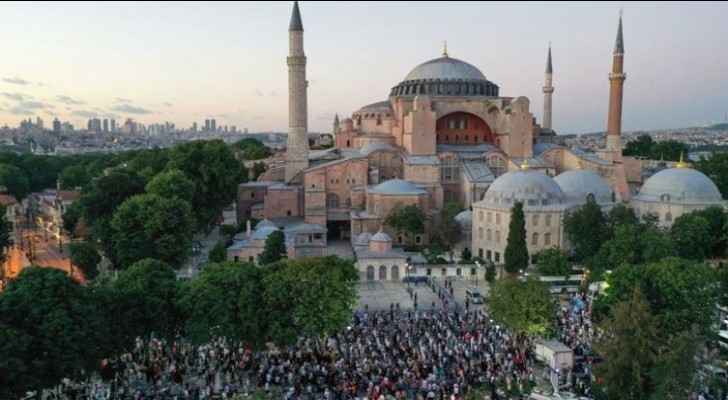 Political analysts said Erdogan's decision to convert Hagia Sophia into a mosque is a political move rather than a decision based on religion, during Saturday’s episode of Roya's Nabd Albalad.

Another expert said it was a natural decision that shows the importance of Hagia Sophia to the Turkish people.

Turkish political analyst Samir Salha said the decision is highly political and will have an impact on the country – especially with the increasing popularity of the Turkish Justice and Development Party.

Losing the municipal elections a few months ago, prompted President Recep Tayyip Erdogan to convert Hagia Sophia in to a mosque, said Salha.

The decision will affect Turkish-European relations and the country’s entry to the European Union, he added.

Jordanian political analyst Amer Al-Tal agreed with Salha and said Erdogan uses "religion as a cover" to implement his policies in Turkey.

The Turkish President uses religion to expand his reach across the Middle East and other countries in which Turkey intervenes, he said.

Al-Tal believes Erdogan has a regional project, supported by the United States, to occupy different areas in some Arab countries, including Syria and Libya.

Al-Tal sees the alliance as a strategic move as well as “a security and military cooperation".

Howver, Jordanian political analyst and member of the Zamzam political party, Nabil Al-Kofahi, said Hagia Sophia Mosque was an active mosque for hundreds of years and converting it back to one is normal.

Arabs who criticized the decision did not voice similar opinions against the occupation regarding Jerusalem or Al-Aqsa Mosque, he said.

IMAGES: Parts of ceiling collapse in mosque during Friday ....

IMAGES: Parts of ceiling collapse in ....