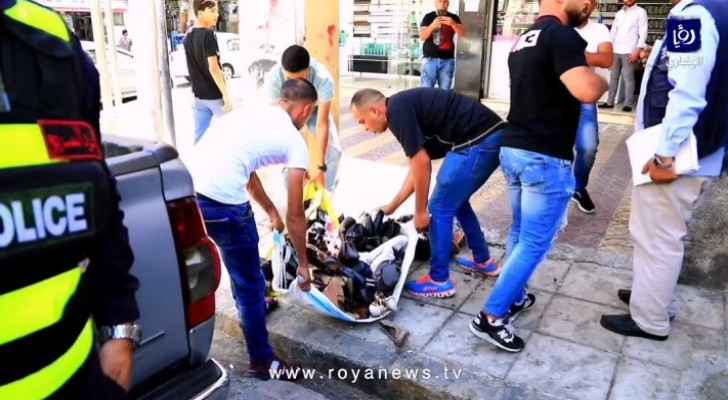 Street vendors were removed from several areas in downtown Amman, as part of a Greater Amman Municipality (GAM) campaign to ensure the Defence Law is adhered to.

A Roya video showed police removing vendors filling the sidewalks and spilling into streets with their goods and market stalls in the city centre on Tuesday.

“Until now, there is no decision from the National Center For Security and Crisis Management to open street markets,” said GAM spokesman Nasser Rahamneh, referring to the body in charge of decisions around reopening the country following the coronavirus crisis.

The government has issued separate Defence Laws enabling different sectors to reopen since the end of the Kingdom’s lockdown. Citizens have called on the government to reopen the remaining closed sectors as households face increasingly desperate financial situations as a result of prolonged unemployment.

“The main goal is never to cut people’s livelihoods, but the aim was to reduce traffic on the streets and ensure pedestrians have safe passage,” Rahamneh added.

GAM has also launched an initiative targeting restaurants in Jabal Amman selling food which fails to meet health and safety regulations. Rotten food discoveries have been destroyed and the violations of those restaurants were recorded.

Parks and gardens to reopen in early ....

GAM to install surveillance cameras near markets in ....

GAM to install surveillance cameras near ....