Safadi: International community must stand up to the occupation

Safadi: International community must stand up to the occupation 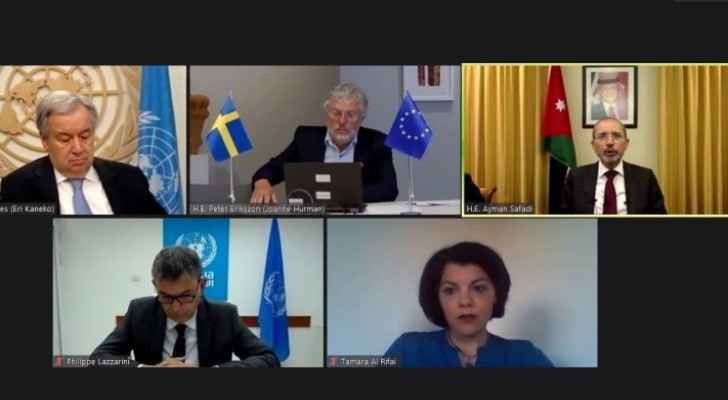 Minister of Foreign Affairs and Expatriates Ayman Safadi has called on the international community to stand up to the Israeli occupation and prevent it from annexing the Jordan Valley.

The minister’s call came during a meeting aimed at highlighting UNRWA’s need for financial support and the impact of the potential annexation of the West Bank on Palestinians and Israel-Jordan relations.

Safadi stressed the importance of addressing UNRWA financial implications posed by the annexation. Should it go ahead, an opportunity for peace would be compromised, as well as the security and safety of refugees, he added.

During an earlier global meeting, $130 million was pledged by 75 governments and non-governmental organisations to sustain the operations and services of UNRWA. Safadi said the UN member states confirmed their rejection of the annexation plan, as well as the need to maintain support for UNRWA to enable it to continue providing its services to five million Palestinian refugees – including two-and-a-half million refugees in Jordan.

“This is a time for action. Supporting UNRWA is a necessary action. The agency has done all it could to ensure efficiency and effectiveness in its operations. We must stand by it,” said Safadi.

UNRWA’s Lazzarini confirmed there was no intention to stop any of the services provided by the organisation.

He said UNRWA was helping to achieve stability in the region, which was confirmed by fifty-three foreign ministers from all over the world, in addition to rejecting the plan to annex the Jordan Valley, which the occupation intends to implement in early July.