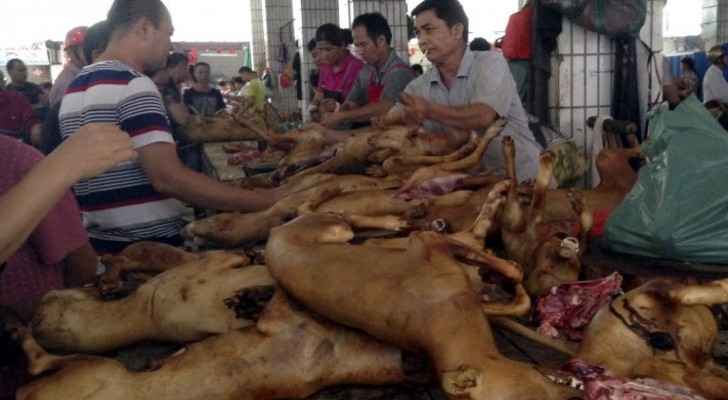 China’s annual dog-meat festival kicked off on Sunday, June 21, amid controversy surrounding the event in light of the spread of the coronavirus and the resulting global pandemic.

The festival will result in the consumption of about 10,000 dogs, over a period of ten days ending on June 30, according to British newspaper The Independent.

Researchers suspect the coronavirus has been contracted from bats and passed to humans in the central city of Wuhan, which has sparked a debate about eating wild and exotic animal meat.

The festival is running in the city of Yulin, located in the Guangxi Province in south China, where temperatures reach high levels, Sky News Arabia reported. The first festival was organised in 2009 but eating dog meat is an ancient tradition in China. People believe the meat has health benefits and it is mostly eaten during the summer.

A popular belief in the region suggests eating dog meat improves male sexual performance, however, the festival has not been without criticism, both in China and abroad.

Activists defending animal rights say dogs are subject to horrific killings during the festival and experts warn of the lack of hygiene and health procedures during the event.

The World Health Organisation has warned trading dog meat is increasing the transmission of disease between animals, and that the risk of cholera outbreaks has increased.

Chinese law does not criminalise eating dog meat. It is a custom dating back four centuries.

Thirty million dogs are killed for meat each year across Asia, according to Humane Society International.

During the so-called ‘Cultural Revolution’ of China, the country prevented dog breeding but the custom spread through the middle-class. Approximately 62 million dogs have been bred in China to date.

In 2016, a survey revealed 64% of the Chinese support ending the dog meat festival, while 69.5% said they had never eaten dog meat.