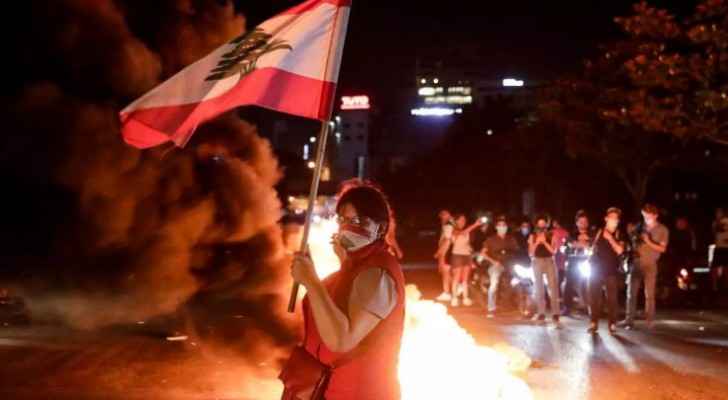 Several people were injured in night-long clashes in Beirut and other areas of Lebanon between police and people protesting the deteriorating economic situation in the country and the decline in the value of the Lebanese pound.

Protesters set buildings, stores and a bank on fire after the confrontations broke out at Martyrs and Riyad Al-Solh Squares in central Beirut at around 10:00 pm, which degenerated into riots and blocking roads with burning barricades.

Army troops and security forces faced off in clashes with demonstrators, who tried to make their way into the government headquarters, using tear gas to halt their advance.

The Red Cross said that it transferred two injured people to hospital, and dozens of others who were hurt, including journalists, were treated on the spot. Security forces also arrested ten people, who took part in the violence and set buildings ablaze with Molotov cocktails.

Petra's reporter in Beirut also said similar protests erupted in the northern Lebanese city of Tripoli, which were marred by riots, assaulting public and private property and an arson attack on the local municipal council building, injuring several military personnel and civilians, three of them were taken to hospitals.

Demonstrators also stormed the gate of an electric generating plant in East Beirut and set fire to a building, and also cut off roads in Sidon and Ghaziyeh in Southern Lebanon.