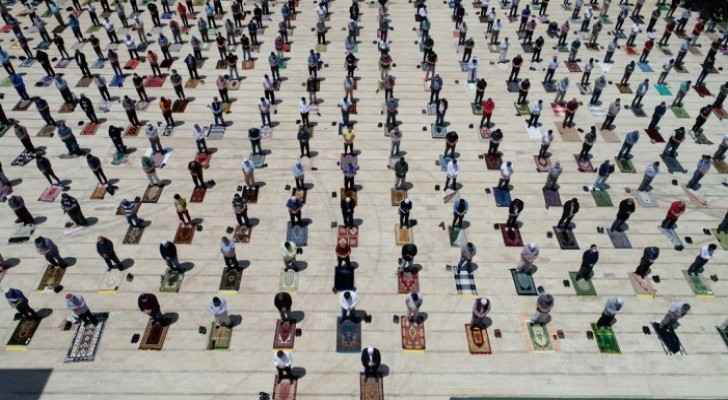 Turkish mosques reopened today for mass prayers, more than two months after they had shut down, as the government eased restrictions aimed at stopping the spread of the coronavirus.

Turkey has been shifting since May to a "new normal" by loosening lockdown measures and opening shopping malls, barbers and hair salons.

President Recep Tayyip Erdogan has said many other sites, including restaurants and cafes as well as libraries, parks and beaches will reopen from Monday.

Hundreds of worshippers wearing protective masks performed mass prayers outside Istanbul's historic Blue Mosque for the first time since mosques were shut down in March.

In Fatih mosque, worshippers prayed both inside and outside, with the municipality handing out disinfectants and disposable carpets.

Gulcek Uyanik, 55, expressed his gratitude at being able to resume mass prayers.

"I have waited a lot for this, I have prayed a lot. I can say it's like a new birth, thanks to God, he has brought us back here," he said.

Another worshipper, Asum Tekif, 50, said: "It has a been a long time, it has been two months, we missed the mosques."

Turkey, a country of 83 million, has so far recorded 4,461 coronavirus-related deaths and nearly 161,000 confirmed cases.