Razzaz talks of COVID-19 crisis, ways to address the pandemic

Razzaz talks of COVID-19 crisis, ways to address the pandemic 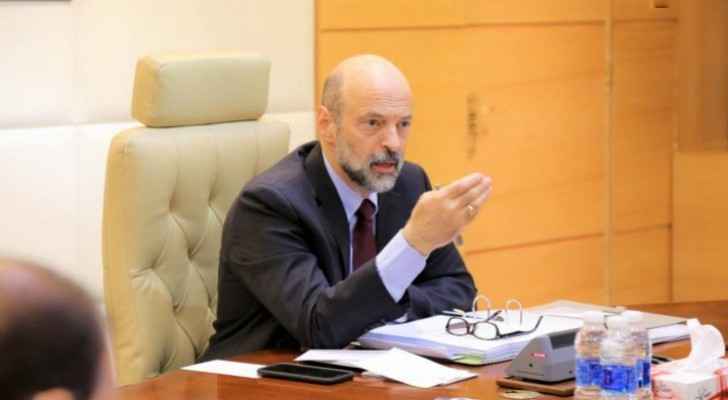 Prime Minister and Minister of Defence Omar Razzaz said on Thursday, May 21, that the number of recorded COVID-19 cases during recent days has led the government to unanimously follow the recommendation of the National  Committee for Epidemics and the Minister of Health and take further precautionary and preventive measures.

In an interview with Fayek Hijazin, the Director-General of the Jordan News Agency (Petra), the Prime Minister said that the government "is relentless in the battle against the pandemic", warning that any slowdown or leniency in this regard will have "very dangerous repercussions".

During the interview, the premier presented a set of measures the government has taken since the beginning of the crisis.

He stressed that the "Himmat Watan" Fund comes under the umbrella of social solidarity, adding that the Central Bank of Jordan (CBJ) has also provided facilities to enable companies to pay the salaries of their employees, which go directly to the employees’ accounts.

In these companies, 25,000 employees have received salaries through these facilities, he said, while the Social Security Corporation (SSC) has developed new programs in addition to the unemployment program to reach 170,000 daily workers or self-employed workers.

He stressed that more than 391,000 families have benefitted from the Himmat Watan Fund, the National Aid Fund and the Zakat Fund, and if added to the number of beneficiaries of unemployment funds, the total will be about 586,000 families, who, when multiplied by the number of family members, constitute a total of about 2.5 million citizens.

The prime minister stressed that the crisis has worldwide repercussions that have led to a global economic downturn. "No country in the world" has remained unaffected, he said.

He pointed out that the World Bank and the International Monetary Fund estimated an economic contraction in Jordan ranging between 3.4 and 3.7 percent at a time when the economy was expected to grow by 1.9 to 2 percent.

This means that, instead of growth, Jordan will experience economic contraction, which requires reconsidering many matters, foremost among them the "Takaful" (solidarity) systems to protect the most vulnerable families and individuals in society, he said.

In response to a question about the unilateral Israeli measures to annex parts of the occupied West Bank, Razzaz affirmed that His Majesty King Abdullah has a "clear, decisive and consistent" response to the Jordanian constants, which he reiterates repeatedly in any international forum on global peace and security.

"His Majesty always reminds that, without a just solution to the Palestinian issue preserving the rights of the Palestinian people, we should not talk about peace," the premier said.

He noted that these Israeli plans "come in exceptional circumstances represented by the coronavirus pandemic and the world's preoccupation with it".

"They also come after the Israeli elections, which ‘stumbled greatly’, and it became clear that there is an intention on the Israeli side to take advantage of the current situation in order to impose unilateral measures on the ground," Razzaz said.

Jordan, in the words of His Majesty, "will not accept this, and accordingly, there will be an opportunity for us to reconsider the relationship with Israel in all its dimensions, but we will not rush ahead of things", Razzaz said.