You must have seen them. Six dancing pallbearers all wearing black suits, what's their story?

You must have seen them. Six dancing pallbearers all wearing black suits, what's their story? 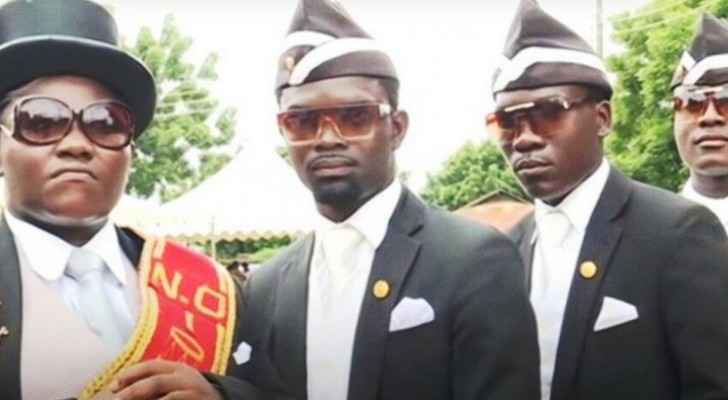 Thousands of memes were spawned as the coronavirus pandemic is sweeping the world, but perhaps the most common one is the "dancing coffin".

You must have seen them. Six dancing pallbearers all wearing black suits and dancing with a coffin.

The story behind the "dancing coffin"

Dancing with a coffin is a funeral ritual in Ghana, as it's believed that performing such rituals brings joy to the soul of the deceased.

The video, which has recently gone viral on social media platforms, dates back to 2015 and has received around 5 million views so far.

The track was released back in 2010, as a collaboration between the two artists.

While many people used the dancing pallbearers' faces sarcastically in memes, the dancers take their job seriously and make a living out of it.

The crew may also include women and the more members of the crew, the higher the amount they receive from the family of the deceased.

They are always well-dressed and dancing to upbeat music amid a large presence of the deceased's family, friends and neighbors in the region.

Funeral held for 13 Hamas commanders in ....

First doses of COVID-19 vaccine distributed by COVAX to ....