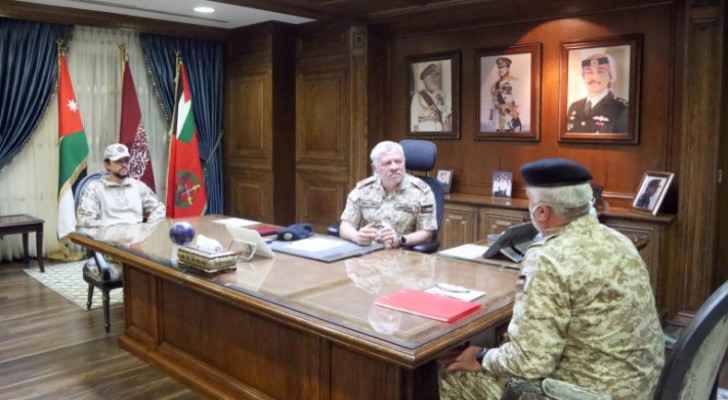 On a visit to the PSD, King Abdullah, accompanied by His Royal Highness Crown Prince Al Hussein bin Abdullah II, said he and all Jordanians are proud of the PSD’s efforts.

During a meeting with PSD Director Maj. Gen. Hussein Hawatmeh, attended by His Royal Highness Prince Rashid bin El Hassan, His Majesty said the PSD’s efforts in the field and citizens’ ability to rise to the responsibility will help Jordan overcome the current difficult conditions.

His Majesty said Jordan has proven that state institutions and society can work together despite limited resources, and this is what is needed to counter challenges.

This is the unity that builds nations, the King added.

His Majesty praised the humane manner in which PSD personnel deal with citizens, while firmly and professionally upholding the law to safeguard the public’s wellbeing and security.

The King was briefed by Maj. Gen. Hawatmeh on the PSD's key plans and measures to ensure optimum execution of government regulations in response to COVID-19.

His Majesty checked on the readiness of PSD's various formations, and their efforts to prevent the spread of the virus, in addition to enhancing the directorate’s security and policing role and stepping up civil defence services in the field.

The King visited the command and control center at the PSD, where he was briefed on the progress of work and the flow of security services provided round the clock, including quick response in emergencies.

Moreover, His Majesty checked on the readiness of the Civil Defence's biohazard disinfection teams, which recently worked to clean and sterilize several locations, and the paramedic team equipped to handle suspected COVID-19 cases.

Epidemiology Committee: Prepare for any surprises ....