Jordan been on a curfew for nine straight days

Jordan been on a curfew for nine straight days 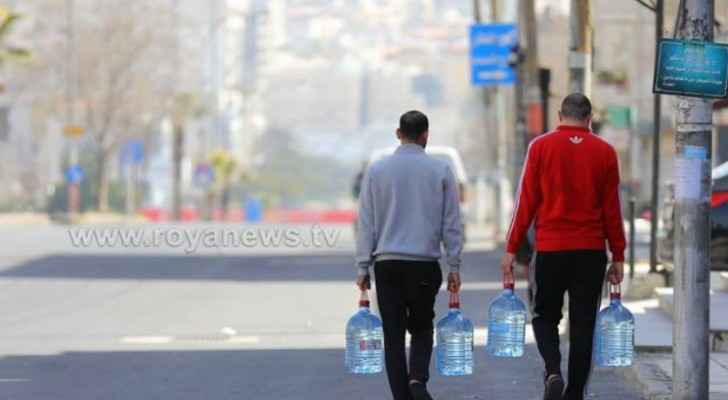 We've been on complete lockdown for nine straight days as part of precautionary measures taken by the government to confront the novel coronavirus, which has so far killed over 30,000 people around the world.

The Minister of Health, Saad Jaber, announced that 11 new coronavirus cases were confirmed yesterday, bringing the caseload to 246.

During a press briefing at the National Center for Security and Crisis Management, the Minister said that among the infected are five people in Irbid governorate, one person who had close contact with a patient, one who had direct contact with her infected daughter who returned from Norway, three people quarantined in the hotels used as quarantined centers, of whom two returned from the United Kingdom and one from Baghdad, Iraq, and one case and it's still unknown how he/she contracted the virus.

Minister Jaber said that three cases are in critical health conditions. Two at Prince Hamzah Hospital and one at King Abdullah University Hospital (KAUH) in Irbid.

The total cases are distributed as follows: 17 in Queen Alia Hospital, 76 cases in the KAUH, and 125 cases in Prince Hamzah Hospital.

Jaber announced that people quarantined at the Dead Sea and Amman hotels will leave the hotels on Monday and that they will be put in "home quarantine" for 14 days.

He also said that 25 more teams were assigned to investigate the epidemic in Irbid, indicating that the Ministry of Health will inform the security authorities to impose lockdown on areas where a number of cases may be found.

Jaber concluded, "with your cooperation, we will fight against this virus and we thank all Jordanians."

The Minister of State for Media Affairs, Amjad Adaileh, said that Jordan recorded a decrease in the number of new COVID-19 cases, as only 11 cases were confirmed yesterday.

Adaileh said that the "decrease doesn't mean that the risk has gone."

He pointed out that many countries in the world where the virus has spread witnessed a variation in the numbers of cases from day to day, and therefore the decrease today doesn't indicate that the epidemic has gone.

"We hope that the day will come soon when we officially announce the end of this epidemic, so that life will return to normal. How much time would this take depends on you, your awareness, and on how well everyone adheres to the general safety and prevention instructions, and not having direct contact with each other," Adaileh stated.

He pointed out that the period of the curfew depends on people's commitment, which the government hopes will be a full commitment.

"We also witnessed a decrease in the number of citizens' complaints about price increases, the lack of availability of goods, and the supply of agricultural products, and this necessarily reflects the integrity of the measures we have taken," he stressed.

The Minister stressed that "the government will continue to take more measures and decisions, in accordance with the comments we receive, and in a way that makes it easier for all citizens to be provided with the basic needs."

The media spokesman for the Public Security Directorate (PSD) said that since early Saturday, March 28, 126 vehicles have been seized and 215 violators were arrested for breaching the curfew orders.

The spokesman confirmed that the vehicles were reserved in the reservation yards in Swaqa and Muaqar areas, adding that the owners will bear all the financial charges for that when receiving their vehicles after a month.

He thanked people who committed to the instructions, stressing that there will be zero tolerance with all those who violate and neglect the security and safety of citizens.