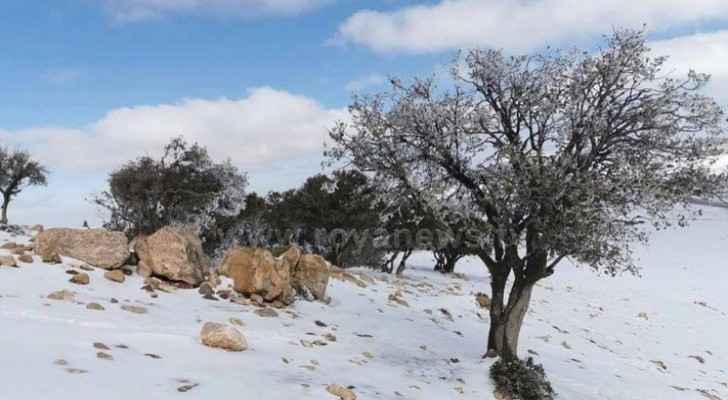 The Jordan Meteorological Department (JMD) published the weather forecast for the next few days and the details of the expected weather depression as follows:

The weather will be generally cold and cloudy in most parts of the Kingdom.

A chance of rainfall is expected in the northern parts of the Kingdom during late night, with southwesterly moderate speed winds, causing dust to rise in the Badia region.

JMD warns citizens of the risk of low visibility due to dust in the Badia region.

A cold air mass centered over southern Turkey will hit the Kingdom, causing a remarkable drop in temperatures.

During daytime, the weather will be extremely cold, with partly cloudy to overcast skies and a chance of rain showers in various parts of the Kingdom.

During late night, rainfall may be heavy at times in the northern and central parts of the Kingdom and may be accompanied by thunderstorms and hail showers.

Active winds that may exceed 70 km/h are expected, causing dust to rise in the Badia region.

A further drop in temperatures is in the forecast, as the weather will be extremely cold, cloudy and rainy in the northern, central and parts of the southern regions of the Kingdom.

Heavy rain is expected at times in some areas and may be accompanied by thunderstorms.

A chance of snow showers is expected over the high areas, especially in the south of Jordan.

Western active winds that may exceed 80 km/h are in the forecast.

During daytime, a slight drop in temperatures is expected, as they will be 4-6 degrees below their annual average.

Chilly and rainy weather is expected, with cloudy skies in most parts of the Kingdom.

The high areas are expected to witness snow showers with accumulation.

At night, there will be a slight chance of rainfall in various areas of the Kingdom.

Shaker 'optimistic' of possibility of snowfall during end ....

Shaker 'optimistic' of possibility of snowfall ....

Shaker 'optimistic' of possibility of snowfall ....

Shaker 'optimistic' of possibility of ....