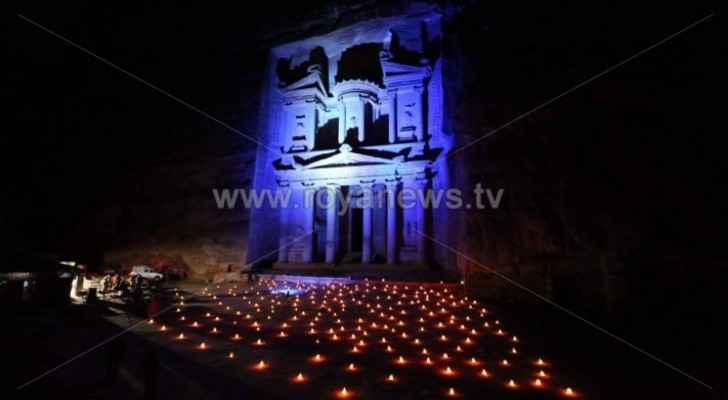 Under the patronage of Her Royal Highness Princess Dina Mired, President of the Union for International Cancer Control (UICC), the Petra Development Tourism Region Authority (PDTRA) on Tuesday lit up in blue the Al-Khazneh (the Treasury) in the ancient city of Petra, in cooperation with the Ministry of Tourism and Antiquities and the Jordan Tourism Board, to mark World Cancer Day.

In a statement on the occasion, Princess Dina said that "many countries in the world light up their key landmarks in blue or orange, and Jordan will be at the forefront of these countries through lighting up the Treasury."

"An ancient city, like Petra, one of the seven world wonders, the city of defiance that still stands tall, defying the forces of nature and the violations of the present man, takes the lead with an impact in sending a message of hope, will and determination to every cancer patient in the world that we are all with you and will fight for you every day so that cancer becomes just a memory in history," the princess said.

Minister of Tourism and Antiquities Majd Shweikeh said in press remarks that Jordan's participation in "this campaign", through lighting up the Petra Treasury, was part of the Kingdom's interest in combating cancer, enhancing the role of societies in supporting the patients and standing beside them, and seizing the occasion to market Petra globally.

She said that the promotion campaign takes place via international media outlets and the various social platforms.

"Through this event, Petra will send a message of hope to all cancer patients in the world by lighting up the Treasury in blue and orange," he said, pledging PDTRA support for such campaigns that "largely contribute to promoting the city of Petra."

World Cancer Day every 4 February is the global uniting initiative led by the Union for International Cancer Control (UICC). By raising worldwide awareness, improving education and catalyzing personal, collective and government action, we're working together to reimagine a world where millions of preventable cancer deaths are saved and access to life-saving cancer treatment and care is equal for all - no matter who you are or where you live.

Princess Ghida: quantum leap made at ....