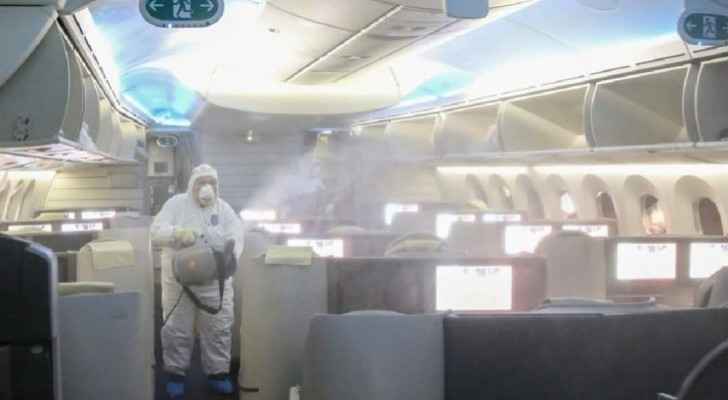 Royal Jordanian conducted a complete sterilization and disinfection procedure to its aircraft that returned from Wuhan to Amman Saturday morning. The aircraft was dispatched to evacuate Jordanians, Palestinians and Arabs residing in this Chinese city where the corona virus was said to originate.

The entire aircraft underwent the sterilization process: seats, facilities and air conditioning; the best cleaning materials and equipment were used by a highly qualified team from a local company for the purpose.

The sterilization and disinfection process went through three phases and took over two hours, following the international standards of the civil aviation authorities and Boeing’s protocol in this regard, which helps kill 100% of bacteria, virus and fungi.

Royal Jordanian has confidence in the safety of the sterilization procedure, which followed a scientifically proven methodology, making use of high-quality products. The electrostatic innovative sterilization protocol was used, following the best practices.

RJ, Jordan's national carrier, is pleased to have carried out the mission of evacuating Jordanians and other Arabs from Wuhan and bringing them to the Kingdom in the shortest time possible, and stresses that the health and safety of its passengers and staff are among its top priorities.

The airline will continue to exert its utmost efforts to maintain the excellent international reputation it enjoys for maintaining the safety and security of its passengers, employees and aircraft.