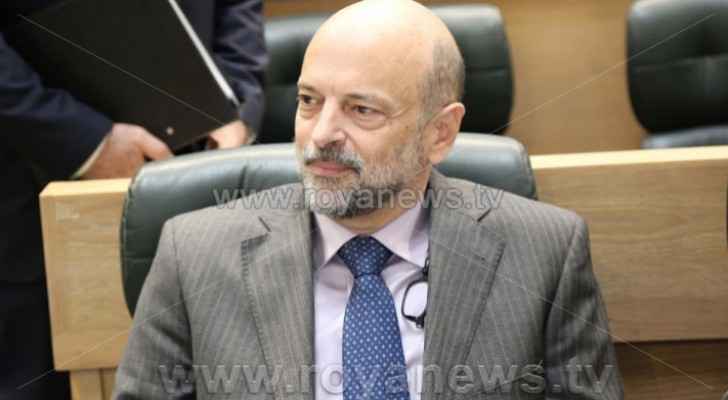 Concluding his participation in the 2020 World Economic Forum (WEF) held in Davos, Switzerland, Prime Minister, Omar Razzaz, said there is a great appreciation and praise of His Majesty King Abdullah II's efforts at regional and international levels, which were expressed by all countries participating in the Forum.

Razzaz said he was honored to participate in the WEF, deputizing for the King, where he felt the great appreciation Jordan enjoys at political and economic levels.

Razzaz stated the geopolitical situation has occupied a large part of the WEF's discussions, explaining that Jordan's message to the forum has shifted the focus on what His Majesty affirmed last week and what he always focuses on at all international forums regarding the centrality of the Palestinian cause for peace in the Middle East and the world as a whole.

He stressed that there will be no solution unless it leads to the establishment of an independent Palestinian state with East Jerusalem as its capital and that the other issues remain side and secondary issues compared to the centrality of the Palestinian issue, pointing out that there are awareness and appreciation by states of this position and great support from European countries participating in the forum.

He noted that discussions and meetings that he conducted dealt with the economic situation in the region and Jordan in particular, adding that there is a positive outlook for Jordan's role in terms of the economy at the regional level and for the economic program that it had committed to.

Outcomes also started to emerge in the economic activity, Razzaz stated, whether it was at the level of export or growth in important sectors such as tourism, construction, real estate and information technology "which we began to witness its positive effects on the ground."

The biggest challenge is still the employment of Jordanian youth and addressing unemployment, the premier stressed, adding that there are mega projects this year and the next that will contribute to stimulating the economy and employing a large number of youth.

Jordan to participate in 108th session of International ....