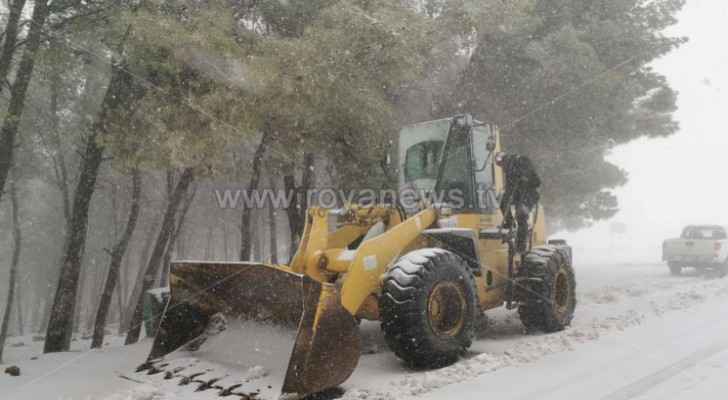 Snow has blanketed the Al Rashadiyyah and Bsaira areas of Tafilah governorate, south of Jordan this morning.

Due to the heavy snowfall, there were partial road closures in those areas.

According to the latest weather updates published by the Jordan Meteorological Department (JMD), temperatures will be swinging between 0-5 in Amman, 0-3 in the high northern areas, -2-2 in the Sharah mountains, 0-8 in the Badia region, 7-14 in the Jordan Valley, 9-14 in the Dead Sea and 9-17 in Aqaba.

There will be a slight chance of snowfall at night over the southern high areas of the Kingdom.

However, the northern and central parts will likely witness rain mixed with snow.

JMD has warned of the risk of slippery roads, flooding in the valleys and lowlands, low visibility due to fog and frost forming at midnight, especially over the high areas and the Badia region.

As for tomorrow, a rise in temperatures is expected, yet the weather will remain cold and partly cloudy.
There will be a chance of light rain in some areas.

At night, the weather is expected to be cold, with a chance of frost formation over the high mountains and the Badia region.

On Thursday, January 23, the weather will be cold and parlty cloudy in various parts of the Kingdom.

A chance of rainfall is forecast over the northern areas.

At night, a cold air mass is expected to hit the Kingdom, as rain showers are in the forecast over the northern and central parts of the Kingdom.