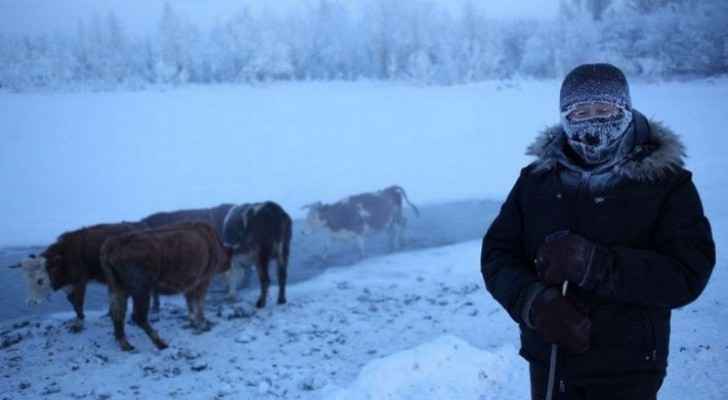 Oymyakon town is one of the famous inhabited settlements in Siberia, Russia, where temperatures reach about minus 58 degrees Fahrenheit in winter, prompting even eyelashes to freeze, according to Sabq newspaper website.

Temperatures could sometimes reach -70 degrees, which is the lowest temperature recorded in an inhabited place in the Northern Hemisphere.

Located some 620 miles from Yakutsk, the settlement of 500 people is widely regarded as one of the coldest inhabited towns in the world.

Due to the low temperatures, no crops grow in the village, which prompts its citizens to depend on horse and elk meat without getting ill-fed.

Residents of Oymyakon face daily problems, including freezing pen ink, freezing eyelashes and glasses sticking to the face.
In addition, people must warm the ground with a bonfire for about 3 days before burying their dead.

The cold cannot be endured and the frostbite is a constant danger there. People usually keep their cars running 24/7 fearing the batteries to die due to low temperatures.

Although there is network coverage in the area, mobile phones do not capture coverage in this chilling weather.
The day in this village lasts for 3 hours in winter. However, the day lasts for 21 hours in summer, as temperatures do not exceed 30 degrees.