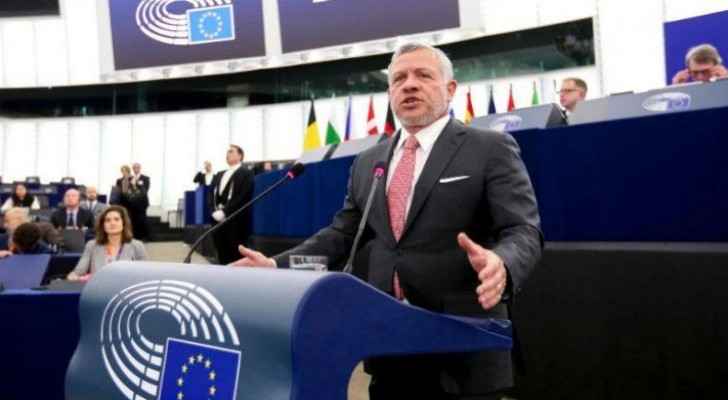 His Majesty King Abdullah on Wednesday delivered an address to the European Parliament in Strasbourg, France, covering a number of regional and international concerns.

Addressing parliamentary representatives of the European Union’s member states, King Abdullah stressed the importance of leadership, noting that leaders have a responsibility to safeguard their people’s long-term interests and welfare.

His Majesty highlighted developments in the region and the world over the past decade.

“The defining feature of the past decade has been people finding their voices. Millions across the world have poured into the streets, marched, occupied, sat down, sat in, tweeted, podcast, hashtagged what they want—loud and clear,” the King said.

Posing a number of hypothetical “what-if” questions to enable a better assessment of how to overcome obstacles in the region and around the world, His Majesty warned of the consequences of failure to create the prospects and job opportunities that young Arabs need.

“Can we afford to let the region’s young people live without hope?” the King asked.

His Majesty warned that over 70 years of the Palestinian-Israeli conflict have played havoc with hopes for justice.

“What if Jerusalem, a city that is close to my heart personally and of great historic significance to my family, remains disputed?” the King asked.

His Majesty also called for maintaining stability in Iraq, saying, “I, for one, will not abandon our brothers and sisters there.”

“Let this reflection upon ‘what-if’ scenarios be a productive exercise, one that can pre-empt countless tragedies and safeguard our people along their journey,” the King said.

Stressing that leadership demands reflection, wisdom, and the long view, His Majesty said, “There is always a better and much more united version of us around every corner.”

“My father, the late King Hussein, taught me that peace making is always the harder but the higher path,” the King added, calling for working with Europe to “reach the future that both our peoples aspire for, and that they and our whole world deserve.”

Sassoli thanked His Majesty for his patient approach towards peace through dialogue, and highlighted the need to work together in the days ahead, citing the recent developments at the start of the year.

Foreign Minister Ayman Safadi, Adviser to His Majesty for Communication and Coordination Bisher Khasawneh, and Jordan’s Ambassador to Belgium and the EU Yousef Bataineh attended the speech.

Following is the full text of the King’s address to the European Parliament:

In the name of God, the Compassionate, the Merciful,

Thank you all. It is an honour to speak before the European Parliament once again.

As I look around this historic Chamber, I see it holds many hundreds of people. But in truth, there are with us today millions more, from different countries, histories, and perspectives.

So we, who are gathered here, have two things in common. First, is our responsibility to these millions—the people who have entrusted us with their hopes and fears.

And second, we are all very fortunate—for a life spent in the service of others, is a life fully lived. But only if we live up to the expectations of the millions of people with us in this hall today.

If we falter, the most vulnerable pay the highest price—the young men and women who look to their future and see nothing; bewildered refugee mothers, clutching their children, with no place to call home; or anxious fathers who cannot find jobs to provide for their loved ones; and the many who feel sidelined, their identity under threat.

The defining feature of the past decade has been people finding their voices. Millions across the world have poured onto the streets, marched, occupied, sat down, sat in, tweeted, podcast, hashtagged what they want—loud and clear.

And they all want the same thing—a fair chance, a fighting chance.

This calls for several "what-if" questions.

And these questions are not merely a whimsical or theoretical exercise, especially in my region, where worst-case scenarios do not lay comfortably within the realm of the hypothetical, but often wander too closely to the borders of our reality. Furthermore, what happens in the Middle East has a way of making itself felt everywhere around the world.

So, let me start with our region’s deepest wound. What if the world gives up on the two-state solution of the Palestinian-Israeli conflict?

Seventy-plus years of conflict have played havoc with hopes for justice. Today, one-staters are actively seeking to impose an unthinkable solution on the region and the world—one state, propped up by structural inequalities, with Palestinians as second-class subjects; one state, turning its back on its neighbourhood, perpetuating divisions among peoples and faiths worldwide.

Five years ago, I stood in this Chamber and spoke of the dangers of failing to move forward with peace. And today, I must say frankly that the dangers have grown—violence continues; settlement-building continues; disregard for international law continues.

What if Jerusalem, a city that is close to my heart personally and of great historic significance to my family, remains disputed? Can we afford to rob Christians and Muslims alike of the spirituality, peace, and coexistence that this city symbolises, and instead allow it to descend into political conflict?

Now, fast forward to the most recent standoff between the United States and Iran. What if, next time, neither side steps away from the brink, dragging us all towards untold chaos? An all-out war jeopardises the stability of the entire region. What's more, it risks massive disruptions of the entire global economy, including markets, but threatens a resurgence of terrorism across the world.

And I ask you another "what-if"; what if Iraq fails to realise the potential and aspirations of its people and slips back into an erratic, seventeen-year cycle of recovery and relapse, or worse yet, conflict?

Iraq is home to 12 per cent of the world’s proven oil reserves. But, more importantly, it is home to over 40 million people, who have suffered through four decades of war, crippling sanctions, occupation, sectarian conflict, and the terror of ISIS. Today, their future rests on a fragile peace. And I, for one, will not abandon our brothers and sisters there.

Now, what if Syria remains hostage to global rivalries and spirals back into civil conflict? What if we see a re-emergence of ISIS, and Syria becomes a staging ground for attacks against the rest of the world?

Syria may be out of the headlines, with its suffering out of sight and out of mind, but the crisis is far from over. Over the past nine months, more than half a million people have been displaced, many of them already refugees.

Do any of us, in this hall, want to see another Syrian refugee crisis unfold, with all its horror and heartbreak? Or another innocent child washed up on your shores?

I know I speak for everyone when I say, absolutely not.

And let me ask you, what if Libya collapses into an all-out war, and ultimately, a failed state? What if Libya is the new Syria, just much closer to the continent you all call home?

And let me say again, what if Arab governments fail to create the more than 60-million jobs our youth will need in the coming decade? And if we fail, wouldn't we in fact be creating a perfect setting for extremist groups? We make their job of recruitment easier if we leave behind a trail of vulnerability and hopelessness.

Can we afford to let the region’s young people live without hope?

Let this reflection upon “what-if” scenarios be a productive exercise, one that can pre-empt countless tragedies and safeguard our people along their journey.

My faith in God reinforces my optimism and my belief in the strength and resilience of humanity. There is always a better and much more united version of us around every corner.

The Holy Quran teaches us that “Those who endure [in patience] and put their trust in their Lord” will enjoy the greatest rewards.

Patience is hard in a world that never seems to slow down, where people make split-second decisions and expect instantaneous results.

Leadership, however, demands the very opposite—reflection, wisdom, and the long view. More than ever, we need patient politics. Because we all have a responsibility to safeguard our people’s long-term interests and welfare; to react to rapidly unfolding events with measured responses, not knee-jerk reactions; because politics is not a game where the fastest win. Sometimes, the faster we go, the farther away we end up from the finish line.

My father, the late King Hussein, taught me that peace making is always the harder but the higher path. And a tough road is best walked with our friends, friends like you and the people of Europe, so that together, we can reach the future that both our peoples aspire for, and that they and our whole world deserve.

Thank you very much.