GAM: 2000 containers distributed in Amman as part of 'sorting waste at source' project

GAM: 2000 containers distributed in Amman as part of 'sorting waste at source' project 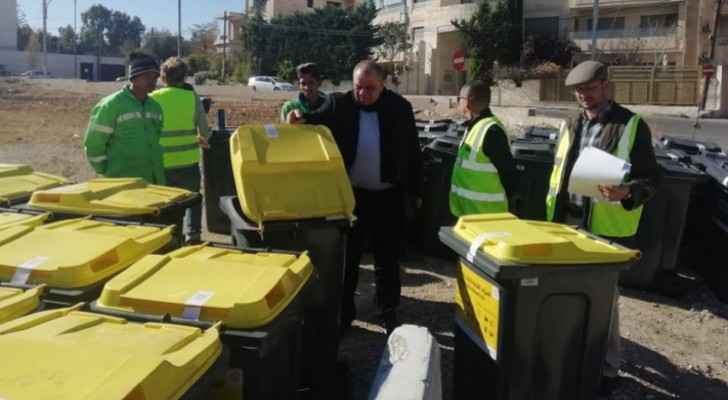 A total of 2000 containers have been distributed in the Radwan neighborhood in Zahran region of Amman as part of Protecting the Climate and Resources through Circular Economy project, in cooperation with the Future Pioneers for Empowering Communities (FPEC), the Greater Amman Municipality (GAM) announced today.

Director of the Environmental Studies and Awareness Department of GAM, Eng. Omar Arabiyat revealed that the second stage of the project, which is funded by the German Agency for International Cooperation (GIZ), will be launched in mid 2020 in the Al-Rawaq and Al-Jurn neighborhood of Basman region of Amman and in Downtown Amman.

"Waste management in Amman may cost JD 65 million, 70% of which are usually allocated for collecting and transporting waste," Arabiyat said, confirming that the project will help to reduce this cost and extend the landfill's lifespan by reducing the total volume of waste there.

The project also aims at improving solid waste management in Amman by sorting waste at source, removing waste at specific times, reducing direct greenhouse gas emissions, and making use of recyclable materials instead of transferring them to landfills.

Al-Radwan neighborhood was chosen as part of a pilot phase of the project because the area has houses, shops, government institutions, schools, hotels, hospitals and embassies.

Before the 2000 containers have been distributed to the area, a campaign was launched in the neighborhood under the slogan "Sort it Right". The campaign lasted for three weeks to introduce the project and its objectives.

The GIZ started implementing projects in Jordan in 1979. It is currently working in the fields of water, education and vocational training, and solid waste.