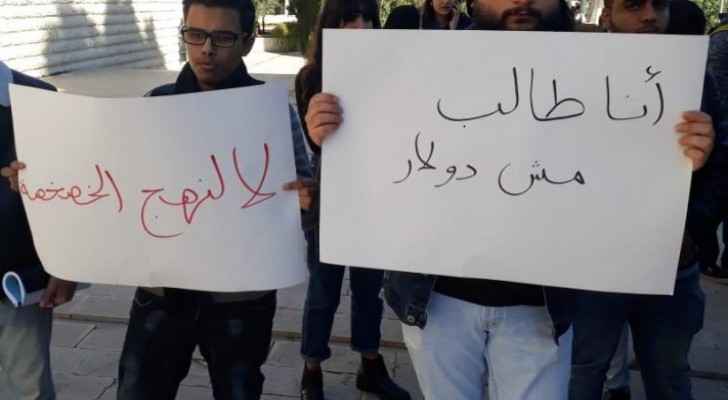 A number of students have organized a sit-in today in front of the University of Jordan's presidency building under the slogan "It's a university, not a business".

Students protested to express their rejection of the privatization approach and the financial decisions taken by the university administration.

The protest is part of a series of protests that students are planning to organize to push the university’s administration to reverse its decision.

Participants in the protest held banners indicating statements that confirm their refusal of the decisions taken by the university administration, such as "I'm a student, not a dollar", "education is for the poor as well" and "no to the privatization approach".

The University administration had taken a set of financial decisions at the beginning of the current academic year, such as raising the wages of female students' housing by 36% and raising Ph.D. certificate fees by 75%.

It also decided to raise the registration fees for postgraduate studies, in addition to raising the regular program of study by 5%, the parallel program by JD 10 and the university admission tests by more than 100%.