Health minister calls on students, teachers having symptoms of flu to skip school for a week

Health Minister during his visit to Karak Public Hospital today 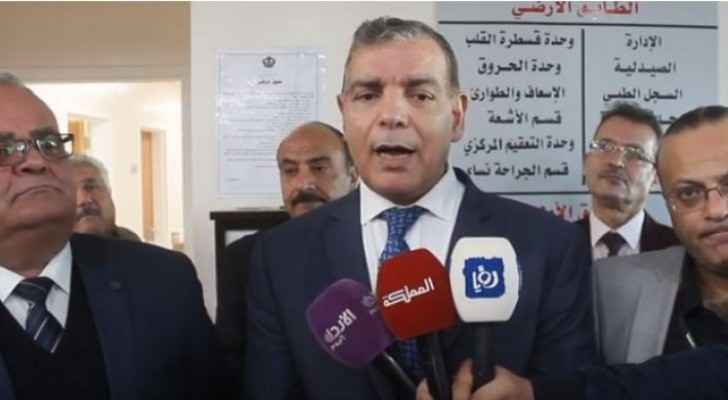 Minister of Health, Dr. Saad Jaber has visited today the Karak Public Hospital to check on the health conditions of the people infected with H1N1 "Swine Flu".

During his visit, Jaber confirmed that there are 19 cases of Swine Flu in Karak.

He noted that most of the patients have recovered and left the hospital.

However, minister Jaber called on students and teachers at all schools of the Kingdom, who have the symptoms of influenza, to skip school for a whole week.

He also called on people to stop shaking hands and kissing when they greet each other and to avoid the practices that may lead to the transmission of viruses and Swine Flu infection.

The minister affirmed that the situation is reassuring, noting that two years ago the number of people infected with the flu in the Kingdom reached 560.

"Medication is available and all hospitals, doctors and clinics are available round the clock to provide medication to citizens who have the flu," Jaber reaffirmed.

He stressed that the Minister of Education and the World Health Organization (WHO) have been contacted in this regard, confirming that the Ministry is taking all preventive and educational procedures.

Hepatitis A vaccine added to Jordan’s ....

Health Ministry: Video of cockroach inside respirator not ....

Health Ministry: Video of cockroach inside ....

Health Ministry: Video of cockroach inside ....