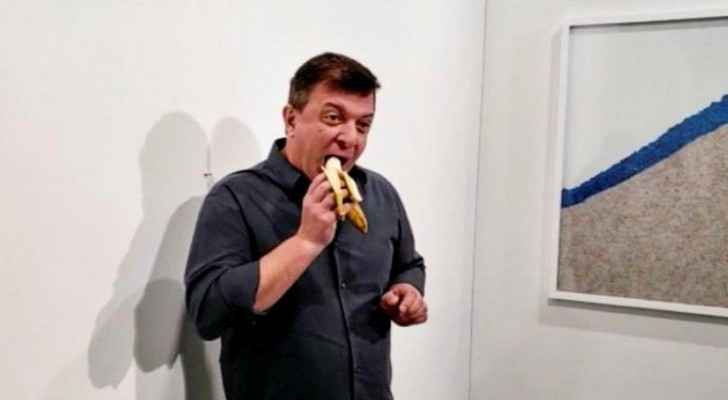 Art Basel Miami highlights the best new work from the world’s contemporary artists, many of whom toil away at their craft, painstakingly, hoping to create something new and innovative under the sun. But naturally all anyone can talk about is the guy who taped a $120,000 banana to the wall and the other guy who ate it, the Guardian reported.

The initial piece, Comedian by the Italian-born artist Maurizio Cattelan, and the subsequent performance/action, Hungry Artist by Georgian-born David Datuna, may seem too ludicrous to even parody, but all parties are making a good show of taking the matter seriously. In its pre-masticated form, Cattelan claimed that he worked on Comedian for a year, before deciding on exactly how to let the banana manifest itself. (In earlier conceptions, it was made of resin, before the sculptor realized “the banana is supposed to be a banana”.) Gallerist Emmanuel Perrotin explained that the angle of the tape and shape of the fruit were “carefully considered”.

While Cattelan certainly has an impish sense of humor, he isn’t someone who barged on to the scene with a bag of groceries. He has had a long career pushing boundaries that include golden toilets (yes, the one recently stolen from Blenheim Palace was his), taxidermy, waxworks of John F Kennedy, the pope and Hitler, and large sculptures of extended middle fingers. When the banana was taped to the wall, it quickly sold for $120,000, followed by another. A third was up for bid to a museum at $150,000 before David Datuna hit the Miami Beach convention center.

Datuna is not just another prankster looking for a potassium fix. He proudly tells me via telephone that he is one of only two artists to have had shows at the Smithsonian’s National Portrait Gallery while still alive. His mixed-media sculptures often include eyeglasses as a motif, and in recent years he has done site-specific political work, such as laying out blocks of ice to spell Trump in New York’s Union Square, which would later melt. (This action was inspired by the withdrawal from the Paris agreement.) In 2022 in Qatar, timed for the World Cup, he is planning, as he calls it, the largest art installation incorporating artificial intelligence that has ever happened.

There was near pandemonium from selfie-takers around Comedian in Miami, and when Datuna saw it (and saw it was from Cattelan) he thought it was great. But when he Googled it and saw the asking price it took “about 15 or 20 minutes” to conceive of “the answer I must give to him and to the art world”.

“Warhol put banana on a canvas,” Datuna says with his Georgian accent. “Cattelan takes a real banana and puts it on the wall. David took banana from the wall and ate it!”

Datuna called his performance piece Hungry Artist and it quickly went viral. He did not have permission from Cattelan or the Perrotin Gallery. 'Just me and the fabric': Vietnam artist finds success ....

Artists take part in cultural exchange between Jordan and ....

Four reasons why you should have Bananas for Suhoor

Four reasons why you should have Bananas for ....

Four reasons why you should have Bananas for ....

Four reasons why you should have ....