Jordan receives international prize for peace and humanity in Geneva

Jordan receives international prize for peace and humanity in Geneva 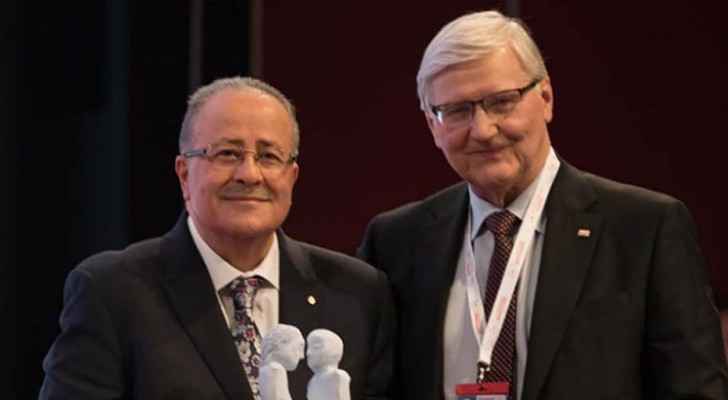 Jordan Red Crescent President Mohammad Hadid received on Saturday, December 7, 2019, the Red Cross and Red Crescent Prize for Peace and Humanity, in appreciation of his efforts and contributions towards creating a more peaceful world through humanitarian work.

The prize, which was created in 1987, is the highest honour granted by the International Red Cross and Red Crescent Movement. It was awarded only three times to institutions that lost a number of their volunteers, who died in the line of duty.

In a speech during the ceremony held in Geneva, Hadid said, "this recognition of humanitarian work should be an inspiration for others,". He noted that this year was the first time that the award went to an individual.

He voiced his pride in the Kingdom's role, as a stable country in the region, in promoting peace.

Hadid underlined the importance of investing in youth, "which will humanize societies by moving away from cruelty to a world ruled by law and establishing a culture of responsibility instead of impunity."

Among Hadid's accomplishments were signing a memorandum of understanding between the Palestine Red Crescent and the Red Star of David, introducing Arabic as one of the languages the Movement uses, and resolving the issue that resulted after the acknowledgment of the Cyprus Red Cross in 2012.

Photos: Peace prevails in Ramtha after ....