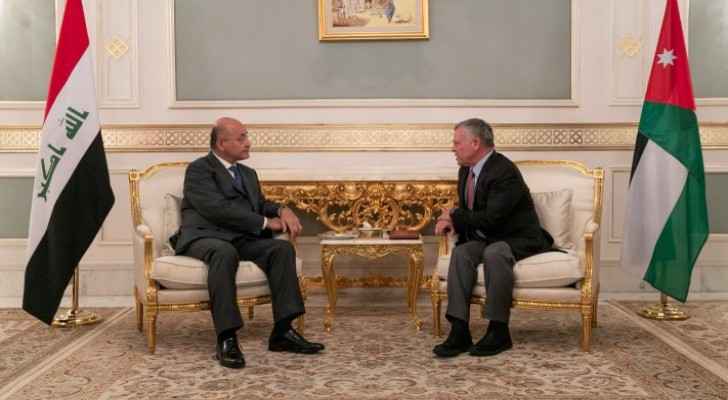 His Majesty King Abdullah, in a phone call on Saturday with Iraqi President Barham Salih, reaffirmed Jordan’s firm commitment to supporting Iraq and its people.

In the phone call, King Abdullah stressed that Jordan is keen on seeing the brotherly Iraqi people overcome current conditions by reaching a national consensus among all components of society on the way forward to bolster Iraq’s stability, security, unity, and political independence; while countering all attempts to intervene in Iraq’s internal and security affairs, and preventing the resurgence of terrorist groups that the people of Iraq have bravely fought and neutralised.

His Majesty expressed Jordan’s firm support for all efforts towards achieving the Iraqi people’s aspirations, leading to rebuilding what has been destroyed by terrorist groups, bolstering Iraq’s internal front, and strengthening national unity and resilience, with the goal of restoring Iraq’s key regional and international stature.

For his part, Iraqi President Salih expressed appreciation for Jordan’s brotherly positions, led by the King, stressing the deep-rooted ties between the two countries and the strategic, historical relations between their peoples.