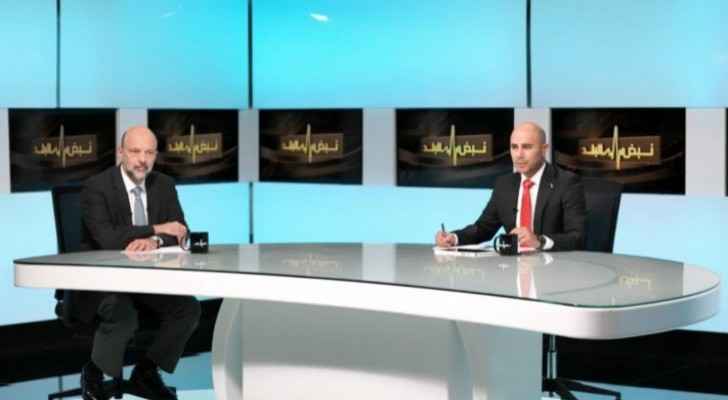 During the interview, PM Razzaz stressed there will be no new taxes in the 2020 budget.

Razzaz mentioned that the cost of energy in Jordan is very high, noting that all agreements with energy companies will be re-examined.

There would be some incentives to reduce energy production costs for companies that produce energy, Razzaz stated.

He explained that the citizen will touch a qualitative leap in increasing capital investment, pointing out that the government has worked on preparing the budget in a different way and that it needs an economy that would offer job opportunities to unemployed people and would improve the citizens' living conditions.

Razzaz confirmed that there is an urgent need to fight tax evasion and customs smuggling.

A large part of the budget deficit will be spent on improving wages, Razzaz revealed, clarifying that there is a defect in the tax system and that the government has plans in relation to indirect taxes, some of which will be announced soon.

Regarding the economic packages launched by the government, Razzaz said that they aim at benefiting the citizens. "For example, cars prices have been decreased," Razzaz noted, adding that a third package will be announced and several additional bodies will be integrated before the end of this year.

On the poverty line, the Prime Minister said, "The poverty rate is 15.7%. We had earlier announced that about one million citizens are poor."

The Prime Minister affirmed that around 70% of the government's targets for this year have been achieved until the third quarter of 2019.

He said that the first decision taken by the Razzaz government was to amend the retirement of ministers law, which indicated that any minister who did not serve for ten years will not receive a pension.

He stressed that his government takes full responsibility for every decision that it makes.

However, on the fight against corruption Razzaz stated, "Around 48 cases have been transferred to the Integrity and Anti-Corruption Commission (IACC)."