King, at Scholar-Statesman Award Dinner, urges countries to believe in their peoples

King, at Scholar-Statesman Award Dinner, urges countries to believe in their peoples 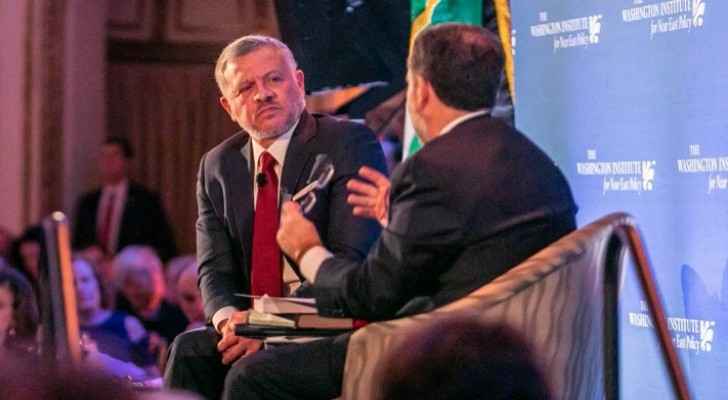 His Majesty King Abdullah, accompanied by Her Majesty Queen Rania Al Abdullah and His Royal Highness Crown Prince Al Hussein bin Abdullah II, participated in a conversation in New York on Thursday evening, November 21, 2019, held by the Washington Institute for Near East Policy with its executive director, Robert Satloff.

The conversation, held as part of the 2019 Scholar-Statesman Award Dinner held in honour of King Abdullah, covered regional developments, the threat of terrorism, and efforts to achieve peace in the region.

Responding to a question on lessons learned on leadership over the past 20 years, His Majesty said: “With all the challenges that we have in our part of the world, you always have to look to the positive, you always have to reach out and do the right thing.”

“As challenging and as confusing as our part of the world looks, I am optimistic; we will move to the future, and I get that inspiration, not only from my family, but from young men and women in Jordan that have that aspiration to make life better,” the King continued.

“Youth want to move forward, live together and make a better world for themselves, and that’s what gives us, I think, the energy to continue,” His Majesty said.

Commenting on extremism, the King noted that the challenge is global, adding that Daesh has been defeated in Syria and Iraq but not destroyed.

His Majesty pointed to renewed threats from the group, warning that “until politicians understand who the enemy is, it’s two steps forward and one step back.”

The King said the challenge comes from the outlaws of Islam, including takfiri jihadist groups like Daesh that utilise the Internet and social media to create a global reach and recruit around the world.

“So unless we call the enemy and those who support them for what they are, it’s going to take a long time for us to be able to deal with this,” His Majesty added.

Commenting on protests in the Middle East and past similar movements, the King said the Arab Spring was led by youth who were frustrated and wanted opportunities.

“We look back at that point in history, and it is obviously a very defining road for us in Islamic and Arabic history, and I think we’ll look back on it and say that was a crossroad that we needed to cross,” His Majesty noted.

“We are the balancer for everybody in society… We are the ones that make sure that everybody is protected and everybody is supported, and I think that is what has helped the monarchies be stable during a very difficult time for our region,” His Majesty continued.

Discussing efforts to rekindle peace efforts in the region, the King stressed the important role of the United States in bringing both sides together.

“I think there’s quite a few of us in this room that believe that the only way to move forward is a two-state solution, because the alternative is worse for all of us—an Israel looking inwards, which none of us can afford. We then have an immediate challenge of equal rights, which, again, is something that we can’t deal with,” His Majesty stressed.

On the current prospects of the two-state solution, the King said “every time we lose a year, it is going to be much more complicated, and much more difficult for the Palestinians and Israelis to get to go forward together”.

Noting that Israel’s future is being part of the Middle East, His Majesty said that cannot happen “unless we solve the Palestinian problem”, which is a sensitive and emotional issue.

“Unless we can solve the Israeli-Palestinian issue, we’ll never have the full integration that all of us deserve in our part of the world,” the King said.

Pointing to the recent elections held in Israel and the current stalemate, His Majesty said, “we are all in pause mode, and we have not been able to get people back around the table talking to each other”.

“The Jordanian-Israeli relationship is at an all-time low. Part of it is because of Israeli domestic issues. We are hoping that Israel would decide its future, whether it is in the next several weeks or in the next three months, and then it is very important for all of us, and I am saying, our friends here in the United States, to refocus our energies on bringing all of us back to the table, and looking at the glass half-full,” His Majesty added.

“The problems that we’ve had with Israel are bilateral. Part of it is internal politics; I understand that, but not at the expense of something that my father and the late Prime Minister Rabin fought so hard to achieve, as a symbol of hope and opportunity for Israelis, Palestinians, Jordanians, and others,” the King continued.

His Majesty pointed out that the Jordanian-Israeli peace was the result of the two sides sitting together “because they had the confidence in each other to create this peace”, voicing hope that the two sides can go back to talking to each other on simple issues “that we have not been able to talk about for the past two years”.

Reacting to calls by US officials to come back from the Middle East, the King expressed understanding for the desire to bring back young men and women out from harm’s way.

“I am absolutely sympathetic with the desire for people to bring their troops back… The United States is in a unique position of being the most powerful, capable country in the world, and with that comes a moral responsibility to help stabilise the world,” His Majesty said.

“From an ex-military point of view, and this is my personal opinion, sometimes when you move out of a campaign before it is over, you are only going to be back tomorrow to try to fix it again, having lost all that ground,” the King underscored.

“Nobody can fault Americans for wanting their loved ones back. But they will be back, unless we solve it, and that is the problem,” His Majesty added.

The King concluded by reiterating the need to empower young people.

“Just know that there is a younger generation of people in our part of the world that just want to get on with their lives,” His Majesty said.

Be they Jordanian, Palestinian, Yemeni, Israeli or Iranian, they want to be able to find jobs, settle down with families, and move on, the King explained.

“Believe in your people, because they do want to have the right thing but give them the opportunity. And I am not just talking about our part of the world in the Middle East. This is all over the place. So, give the young people your love and your consideration, because they will make the world better if we give them a chance,” His Majesty concluded.