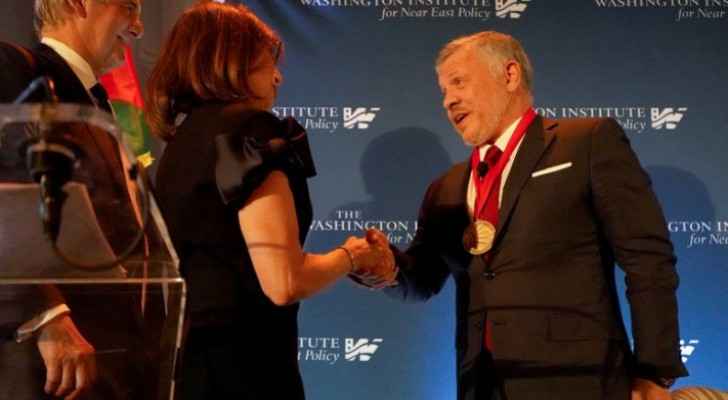 His Majesty King Abdullah II has received the 2019 Scholar-Statesman Award in New York, from the Washington Institute for Near East Policy.

His Majesty received the award in recognition of His Majesty’s leadership and commitment to advancing peace, stability, harmony and tolerance in the Middle East.

The award was presented to His Majesty by Chairman of the Board of Trustees of the Washington Institute for Near East Policy, James Schreiber during a ceremony held on this occasion.

In remarks at the ceremony, WINEP Executive Director Robert Satloff noted that when His Majesty talks, people listen, be they leaders around world or the millions of his people, who count on him to provide wisdom and guidance, vision and balance, leadership and security.

For his part, Schreiber addressed the King saying, “you have led your country with strength, compassion, moderation and wisdom.”

He added, “you have been a committed warrior for peace, and a determined leader in the battle to confront extremism. In your faith, and in all faiths, you have been a true partner of our country, the United States.”

During the ceremony, a tribute video was screened, highlighting His Majesty’s achievements and efforts to pursue peace in the region and to promote dialogue and interfaith harmony, as well as his role as the Hashemite Custodian of Islamic and Christian holy sites in Jerusalem.

After receiving the award, His Majesty sat for a conversation with WINEP Executive Director Satloff, during which His Majesty spoke of the latest developments in the Middle East, the threat of terrorism and extremism, and efforts to pursue peace in the region.

The Scholar-Statesman Award celebrates outstanding leaders who, through their public service and professional achievements, exemplify the idea that sound scholarship and a discerning knowledge of history are essential to wise and effective policy and the advancement of peace and security in the Middle East.