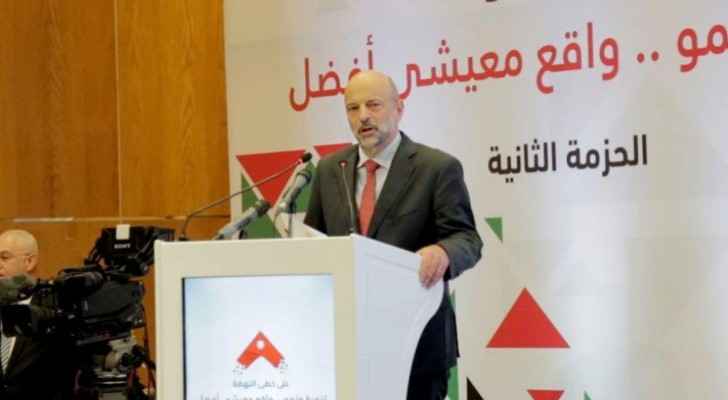 During a meeting held today, the government has announced a series of measures and incentive decisions that would affect a number of vital sectors within the framework of the second economic stimulus package

Prime Minister Omar Razzaz said, "it's our mission to work together with genuine partnership so that we can improve the living conditions of citizens."

"With the efforts of all partners, we will be able to implement the royal visions, which indicate improving the living conditions of the citizen, Razzaz mentioned, adding that the government has held intensive meetings with the private sector to come up with viable solutions to which the government is committed and questioned.

Razzaz noted that the first stimulus package resulted in a 93% increase in the real estate sector.

Talking about the tourism sector, Razzaz said that it's one of the most important sectors that contribute to the employment of our young men and women in Jordan, announcing that eight government agencies and institutions will be integrated.

He pointed out that the government will announce a clear plan for public transport and will review the taxes and fees on e-cars.

The government decided to close down the Securities Depository Center and integrate it with the Jordan Securities Commission and Amman Stock Exchange (ASE).

The government has so far passed and amended 175 legislation, including 51 laws, under which routine functions had been transferred from the Cabinet to the competent ministers and from ministers to secretaries-general and directors.