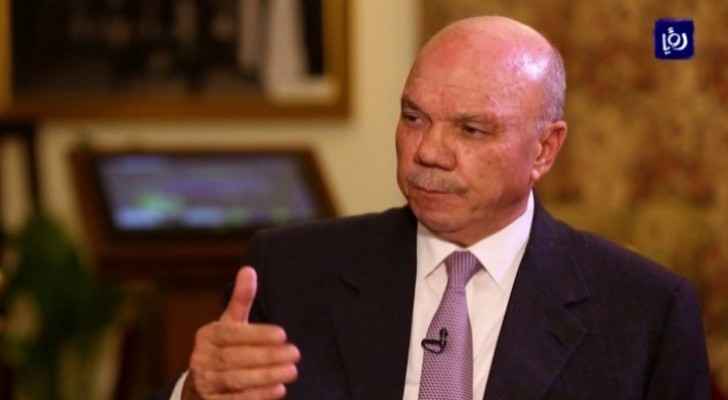 Senate President Faisal Fayez met on Sunday, November 17, 2019, with Prime Minister Omar Razaz, ahead of the government's submission of the Draft General Budget Law for the Fiscal Year 2020 to the Parliament.

During the meeting, attended by members of the Senate's permanent office, heads of its committees, and a number of ministers, Fayez stressed that the government "should be working hard" to translate the Royal vision, which focuses on improving the economic situation, improving the citizens' living standards, and reflecting on increasing economic growth, reducing poverty and unemployment, and creating permanent job opportunities for the country's youth.

The meeting, Fayez noted, comes within the framework of consultation between the Senate and the government on the preparation of the 2020 budget, emanating from the principle of partnership between the legislative and executive authorities and in accordance with the Constitution, and reflected on serving higher national interests.

Fayez mentioned that the economic challenges facing the Kingdom require working in a team spirit and strengthen the principle of partnership, to enable the country face the economic challenges and find more diversified investment opportunities that employ the labor, adding that His Majesty King Abdullah II, in the Speech from the Throne, called for solutions that improve the citizens' living standards, enable economic development and self-reliance.

Fayez called on the government to face economic challenges and develop strategic, applicable economic plans according to specific time frames so that citizens can see their impact on their lives. He pointed to the importance of consultation and coordination between the Senate and the government to translate His Majesty's aspirations to provide a decent life to citizens.

Fayez also urged the government to work on strengthening the partnership between the public and private sectors and improve the Kingdom's investment environment.

For his part, the premier said the 2020 budget "will not be easy," in light of the pressing economic conditions in Jordan, which need the participation of all in diagnosing the reality and developing solutions.

Regarding the spending side of the 2020 draft budget, Razzaz said, " There will be a review of the salary structure, and linking increases on pay and allowances with performance, '' pointing to the importance of simultaneously considering the sagging, which plague some independent bodies and institutions.

The current consultations, Razzaz announced, will lead to announcing a set of "deliberated" decisions and procedures, adding "there will be weekly meetings with our partners in the legislative authority and in implementation of His Majesty's directives on the need to make dialogue a real partnership to serve the Kingdom's interests.

Japan’s assistance to Jordan from its supplementary budget ....