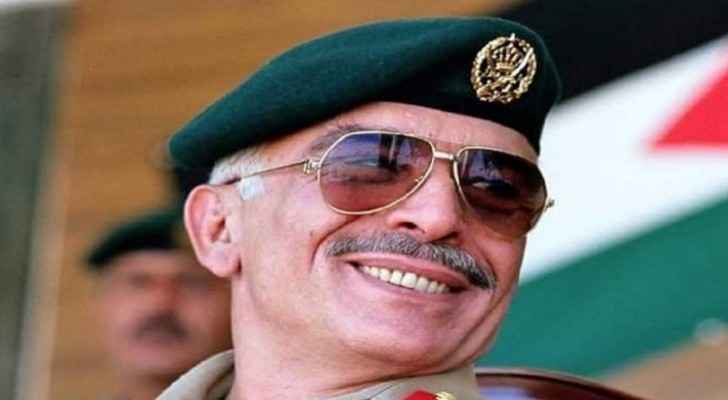 Today marks the 84th anniversary of the birth of His Majesty the late King Hussein, who reigned for 47 years.

A direct descendant of Prophet Mohammad, King Hussein was born on November 14, 1935, as the eldest son of King Talal and Queen Zein Al Sharaf.

Hussein was born on November 14, 1935. He proclaimed King of Jordan on August 11, 1952, and a Regency Council was appointed until his formal accession to the Throne on May 2, 1953, when he assumed his constitutional powers after reaching the age of 18.

King Hussein studied at the Islamic Scientific College and then enrolled at Victoria College in Alexandria. In 1951, he entered Harrow College in England before receiving his military education at the Royal Military Academy Sandhurst in England, which he graduated from in 1953.

Throughout his long and eventful reign, King Hussein worked hard at building his country and raising the living standard of each and every Jordanian.

Early on, King Hussein concentrated on building an economic and industrial infrastructure that would compliment and enhance the advances he wanted to achieve in the quality of life of his people.

King Hussein also struggled throughout his 47-year reign to promote peace in the Middle East. After the 1967 Arab-Israeli war, he was instrumental in drafting UNSC Resolution 242, which calls on Israel to withdraw from all the Arab lands it occupied in the 1967 war in exchange for peace. This resolution has served as the benchmark for all subsequent peace negotiations. In 1991, King Hussein played a pivotal role in convening the Madrid Peace Conference, and providing an "umbrella" for Palestinians to negotiate their future as part of a joint Jordanian-Palestinian delegation. The 1994 Peace Treaty between Jordan and Israel is a major step toward achieving a just, comprehensive and lasting peace in the Middle East.

King Hussein’s commitment to democracy, civil liberties and human rights has helped pave the way in making Jordan a model state for the region. The kingdom is internationally recognized as having the most exemplary human rights record in the Middle East, while recent reforms have allowed Jordan to resume its irreversible drive to democratization. In 1990 King Hussein appointed a royal commission representing the entire spectrum of Jordanian political thought to draft a national charter. Today the National Charter, along with the Jordanian Constitution, serves as a guideline for democratic institutionalization and political pluralism in the country. In 1989, 1993 and 1997, Jordan held parliamentary elections which were accredited internationally as among the freest and fairest ever held in the Middle East.

King Hussein married Queen Noor on June 15, 1978. They have two sons -Hamzah and Hashem- and two daughters -Iman and Raiyah. His Majesty is also survived by three sons -Abdullah, Faisal and Ali- and five daughters -Alia, Zein, Aisha, Haya and Abeer- from three previous marriages. Toward the end of his life, King Hussein became the proud grandfather of a growing number of grandchildren.

Over the course of his life, His Majesty King Hussein was an avid sportsman. He was an accomplished aviator, motorcyclist and race-car driver who also enjoyed water sports, skiing and tennis. He was well-known to ham radio operators throughout the world as the friendly voice of "JY1". In his final years, King Hussein enjoyed surfing the Worldwide Web and developed a strong appreciation for the power of the Internet as a force for progress and understanding. King Hussein's directive to provide Internet access for every Jordanian school highlights yet another aspect of his enduring legacy.

RHC mourns passing away of Princess ....