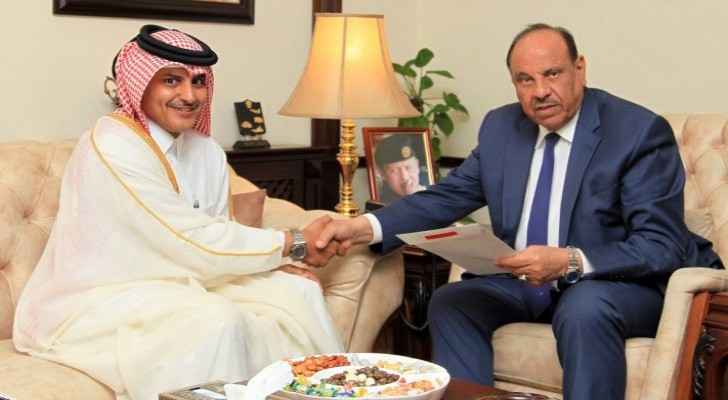 During the meeting, His Majesty and Sheikh Saud discussed bilateral relations and cooperation, particularly in the political, security and policing fields.

The meeting also discussed the situation of Qatari and Jordanian students studying in colleges and institutes in the two countries.

Hammad underscored the Jordanian-Qatari relations that have been founded on the basis of mutual respect, stressing Jordan's keenness in providing proper care to Qataris living in Jordan.

Minister Hammad pointed to the need to facilitate procedures of exchanging security and technical expertise between the two countries, especially in combating terrorism, extremism, narcotics trafficking, arms trade, and efforts for reducing crime of all kinds.

For his part, the Qatari ambassador highlighted the deep-rooted relationship between His Majesty King Abdullah II and Qatari Emir, Sheikh Tamim bin Hamad Al Thani, and their keenness to serve the best interests of the two countries and the Arab and Islamic world.

He praised the Jordanian capabilities, especially in the fields of security and police training, confirming that it's important to explore prospects of bilateral cooperation between the two countries.