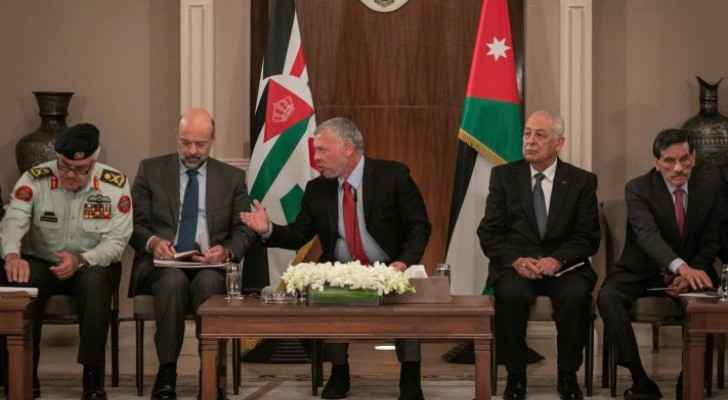 His Majesty King Abdullah met with representatives and leading figures from the Ajarmeh tribe, as part of the Basman Forum meetings launched on Tuesday, November 5, 2019, at the Royal Hashemite Court.

During the meeting, attended by Prime Minister Omar Razzaz, King Abdullah welcomed the attendees, commending all Jordanian tribes for standing by the homeland.

His Majesty expressed optimism in the future, noting that the country is actively moving forward.

The King pointed out that the Jordanian economy is improving, which requires efforts by the government to attract investments with the aim of creating employment opportunities for young people, stressing the need to empower and qualify youth for entry into the labor market.

Moreover, His Majesty underscored the importance of coordination and cooperation between various government agencies to facilitate investments.

The King noted the need for citizens to sense the positive impact of the package of measures announced by the government to stimulate economic growth and incentivize investment.

His Majesty added that he has directed the government to implement a number of projects to improve the living standards of Jordanians.

For their part, the attendees expressed appreciation for the King’s ongoing outreach to citizens to hear their concerns, noting Jordanians’ unity behind His Majesty in safeguarding the nation’s achievements and highlighting their pride in the armed forces and security agencies.

Representatives of the Ajarmeh tribe also praised the King’s position in defending the Palestinian cause and safeguarding Islamic and Christian holy sites in Jerusalem, in line with the Hashemite Custodianship, commending His Majesty’s efforts towards regional security and stability.

Ahead of the meeting, Prime Minister Razzaz met with the Ajarmeh tribe representatives and spoke about domestic concerns and the package of measures announced by the government to stimulate the economy, noting that they will reflect positively on citizens’ living standards soon.

The prime minister also listened to the attendees’ concerns and said the government will look into them.

Royal Decree approves issuance of special pardon for those ....