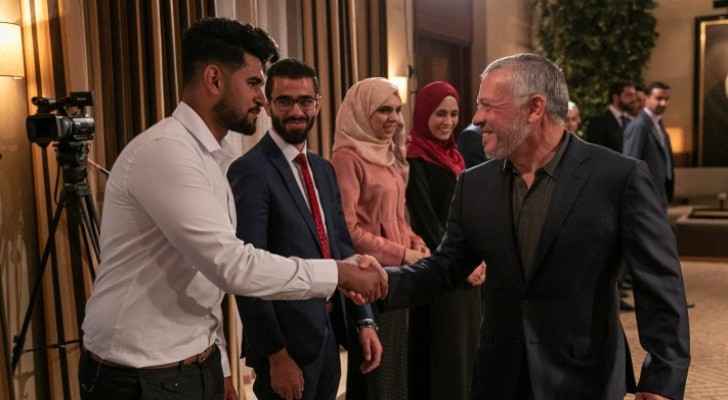 His Majesty King Abdullah reaffirmed on Sunday, November 3, 2019, his keenness to support young Jordanians’ innovative projects and to hear from them, voicing pride in their achievements.

Speaking at a meeting with young entrepreneurs from around Jordan at Al Husseiniya Palace, King Abdullah said young Jordanians’ energy and potential make each one of them a success story and a model to follow.

His Majesty stressed the important role of innovators in reducing poverty and unemployment, noting the potential of benefiting from their ideas and implementing them around Jordan.

The King also called for capitalizing on the programs offered by the government to support young entrepreneurs.

For their part, the young entrepreneurs at the meeting thanked His Majesty for his ongoing support for their projects and ideas, empowering them to build their future to serve society and create job opportunities.

They stressed that their positive engagement led them to start their own projects rather than wait for a job, adding that young Jordanians are qualified and capable of utilizing the potential and opportunities before them.

The young innovators spoke about their projects, briefing His Majesty on their success stories in various sectors, including tourism, ICT, hospitality, manufacturing, entertainment, education, and handicraft.

King participates in series of workshops with economic, ....

King participates in series of workshops with ....

King participates in series of workshops with ....

King participates in series of ....