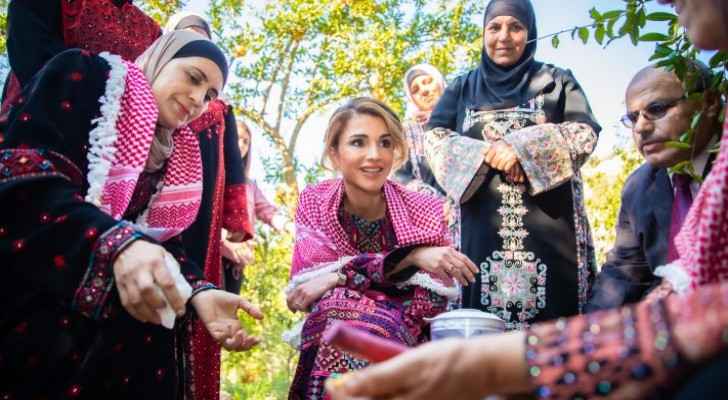 Established in 2010, the Kufrsoum Agricultural Cooperative Association for Pomegranate Producers aims to develop the local pomegranate industry and benefit from the area’s fertile soil. The cooperative association works to build the capacities of its employees and volunteers, and to provide job opportunities to local women and youth through its income-generating projects.

According to Obeidat, the Kufrsoum Agricultural Cooperative Association for Pomegranate Producers has implemented a number of agricultural projects in the area, including the introduction of community-based credit schemes and the rehabilitation of water canals. It also offers training courses and hosts workshops, scientific days, and awareness sessions for the local community.

Queen Rania commended the association for serving as an example of how a community can come together to make the most of its natural resources, expressing admiration for the local families that believed in their capabilities and worked hard to realize their potential.

During her visit, Her Majesty viewed some of the association’s products, which include pomegranate juice, molasses, vinegar, seed oil, soap, tea, and nougat. She then joined a group of women at a soap-making workshop.

The Queen also met with some of the cooperative association’s beneficiaries, joining a group of women at the residence of Um Fouad before touring a pomegranate farm, where workers were seeding the fruit.