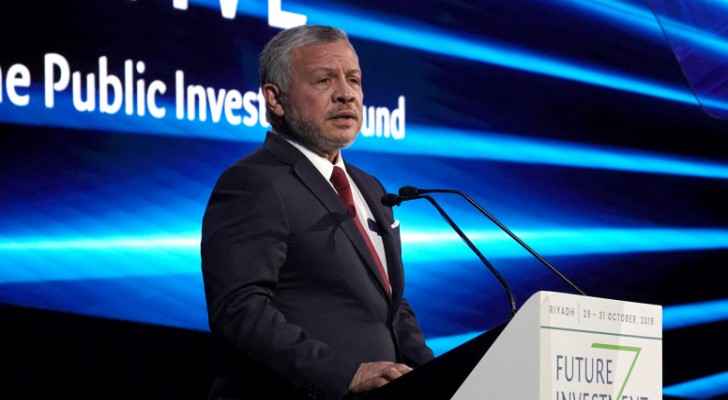 His Majesty King Abdullah on Tuesday participated in the third Future Investment Initiative (FII) 2019 forum in Riyadh, organised by the Saudi Public Investment Fund under the patronage of Custodian of the Two Holy Mosques King Salman bin Abdulaziz of Saudi Arabia.

Delivering a speech at the forum—attended by Saudi Crown Prince Mohammed bin Salman, who is also deputy prime minister and minister of defence—King Abdullah highlighted the vast potential of Arab and Jordanian youth, calling for investing in their talents to build a stronger region and a brighter global future.

“Young Jordanians never cease to amaze me with their infectious energy and ambitious dreams. They are the coders and creators, the disruptors and innovators of tomorrow. Investing in their boundless talents is an investment in a bright future for our region and our world,” His Majesty said.

“We are home to youth-led enterprises that are changing the face of the economy in our region and beyond. Though Jordanians make up only 3 per cent of the region's population, they represent 27 per cent of its top innovators,” the King added in the speech.

“With a total of 160,000 registered engineers, those specialised in ICT are bringing bilingual and Arabic products and features to the Internet, video games, and mobile apps, and driving enterprise opportunities in AI, data analytics, cybersecurity, and more,” the King added.

“Jordan’s over 35,000 highly qualified physicians are turning our medical sector into a promising engine for growth. And the adoption of cutting-edge technologies and solutions and expertise has turned Jordan into a major medical tourism destination in the region,” His Majesty said.

“Arab youth are our most vital resource and the key to the future of this region and this world, and they are waiting for you,” the King added, addressing investors, noting that the “future starts here, in this region, with its talented, creative, and forward-looking youth.”

“Every investment in their success, and every enterprise that maximises their opportunities, builds a better future for all,” His Majesty underscored.

The three-day FII forum, held with the participation of leaders and representatives of several countries, in addition to international experts and investors, covers the latest trends and future opportunities in the global economy.

On the sidelines of the forum, the King met with a number of economic figures, including World Bank Group President David Malpass, to discuss economic cooperation and attracting investments.