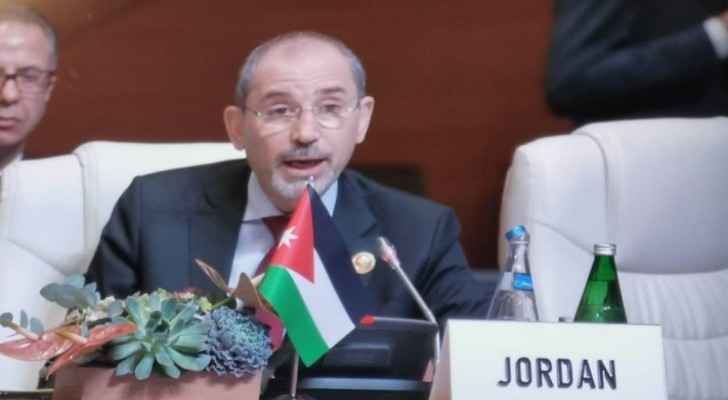 Safadi called on the NAM members to launch a real effort to end the Israeli occupation as the only way to achieve peace, stressing the importance of adopting new approaches to solve the Syrian crisis in a manner that advances the interests of Syria and its people over the conflict of agendas.

The minister stressed the need to pursue a holistic approach to combat terrorism, which, he said, does not belong to any civilization or religion, pointing out that the Aqaba Meetings are an initiative complementing the Kingdom's efforts to combat terrorism and hatred.

In 1955, Jordan joined another 28 nations in the launching of the Non-Aligned Movement (NAM), a collective action that seeks freedom, justice and balance in international relations, and 64 years after the movement's birth, the Ten Principles of Bandung remain a necessity to overcome our common challenges, the minister said.

The foreign minister said: "Our movement stood against colonialism and rejected it as evil, oppression and aggression and a violation of the right of peoples to freedom and self-determination. However, the Israeli colonization of the State of Palestine continues to violate the rights of the Palestinian people and threaten international peace and security."

"The Palestinians and all Arabs have chosen peace, and Israel has chosen to continue its illegal, illegitimate and inhuman occupation. Therefore, the conflict will continue, and our region will not enjoy a comprehensive and lasting peace without ending the occupation and resolving the conflict base on the two-state solution on pre-June 1967 lines with East Jerusalem as its capital living in peace and security alongside Israel."

He said: "Our movement is the second largest international bloc of 120 member states unanimous on the Palestinians' right to freedom, state and dignity, but our unanimity is confronted by daily unilateral Israeli actions that kill the chances of achieving peace. Such actions include illegal settlement construction, land confiscation, and absurd attempts to obliterate Arab Muslim and Christian identity of Jerusalem and its sanctities."

Safadi stressed that Jerusalem, as affirmed His Majesty King Abdullah II, the Custodian Over Jerusalem's Muslim and Christian Holy Sites, is the key to peace, but the Israeli occupation and its attempts to change the legal and historical situation in the holy city and its sanctities make the city an arena of oppression and deprivation.

On the UNRWA, the minister explained that the attempts to deprive the Palestinian refugees of their rights to live in dignity and to education and medical treatment, by targeting the UNRWA, is a flagrant violation of the principles of the movement that must be addressed by providing for the agency's financial needs and maintaining its mandate.

Turning to Syria, Safadi said the Syrian crisis is a disaster that NAM and the international community as a whole must intensify their efforts to end through a political solution that preserves Syria's territorial integrity and cohesion.