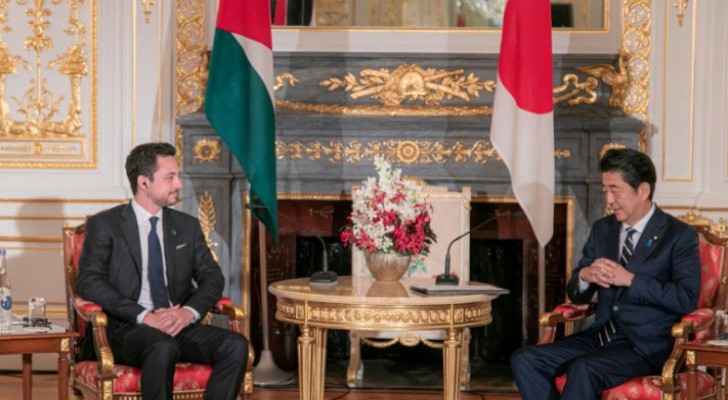 His Royal Highness Crown Prince Hussein met in Tokyo on Monday, October 21, 2019, with Japanese Prime Minister Shinzo Abe to discuss the strategic partnership between the two countries and means of enhancing cooperation in all fields.

The Crown Prince conveyed the greetings of His Majesty King Abdullah II to the Japanese Premier, wishing him good health and happiness, and the friendly people of Japan further progress and prosperity.

His Highness expressed his pride in the deep historical friendship between the two countries and peoples, and the distinguished relations between the royal families of Jordan and Japan.

The Crown Prince said he appreciated Japan's continuous support to Jordan to carry out many development projects, as well as its endeavors to bring about peace and stability in the Middle East.

The meeting was attended by the Jordanian ambassador to Japan and a number of Japanese officials.

Crown Prince Hussein is in Japan to attend the enthronement of Emperor Naruhito, which will take place tomorrow.