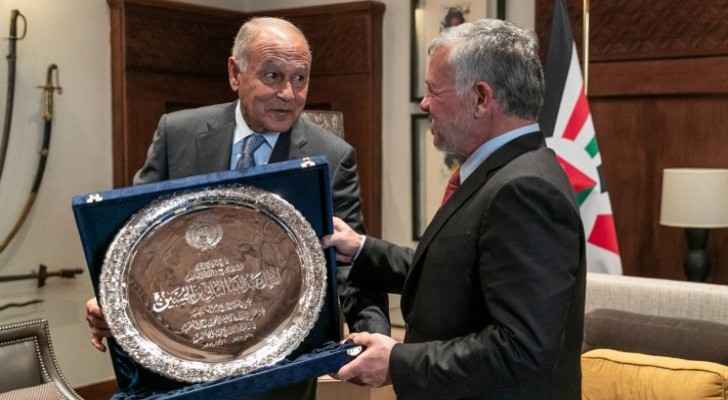 His Majesty King Abdullah received on Sunday, October 20, 2019, the 2019 Arab Development Work Shield presented by the Arab League, in recognition of His Majesty’s efforts in advancing development in Jordan and his support for Arab causes.

The shield is presented to Arab leaders and visionaries with impactful contributions to sustainable development to highlight successful and inspiring models of development on an Arab level.

During the meeting, His Majesty expressed appreciation for the initiatives and efforts undertaken by the Arab League to showcase development achievements in Arab countries, as well as Arab support of development in Jordan.

The King noted that joint Arab action to achieve development and create opportunities is the only way to promote Arab prosperity and address the crises facing Arab societies.

Discussions at the meeting also covered the latest Arab and regional developments, with His Majesty stressing the importance of coordinating and unifying Arab positions and emphasizing the role of the Arab League in maintaining Arab coordination on regional issues, especially the Palestinian cause.

The King underscored the need to support the Palestinians in gaining their just and legitimate rights to establish their independent, sovereign Palestinian state on the 4 June 1967 lines, with East Jerusalem as its capital, based on the two-state solution.

Discussing the Syrian crisis, the importance of reaching a political solution that safeguards Syria’s territorial integrity and the unity of its people, while guaranteeing the safe and voluntary return of refugees, was stressed.

The meeting also covered efforts to reach political solutions to regional crises that would restore security and stability to the peoples of the region.

Presenting the shield to His Majesty, Arab League Secretary-General Aboul Gheit commended the King’s contributions to Jordan’s development, noting that His Majesty’s vision to invest in the Jordanian individual has been an impactful strategic choice that is now bearing fruit.

He added that Jordan has been able to navigate various challenges and to maintain its stability with the King’s wise leadership, describing His Majesty as an innovative leader of a promising, innovative nation.

King receives cables on 20th Accession to the Throne Day, ....

King receives cables on 20th Accession to the ....

King receives cables on 20th Accession to the ....